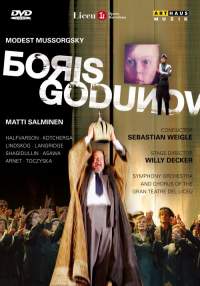 Boris Godunov responds well to straightforward, visually arresting staging, and that is exactly what it gets here. This 2004 production from Barcelona updates the action to 20th century Russia, although it is difficult to say exactly when. The soldiers' uniforms and the peasants' rags suggest the action is taking place before, or possibly during, the Revolution, while Godunov and Shuisky's modern(ish) business suits imply they are oligarchs of more recent times.
The scenery is mostly in a monotone metallic grey, which gives the few props all the more visual impact. Boris' throne is a giant gold chair, which dwarves everyone on the stage, most tellingly the Tsar himself. It also offers an excellent focal point or the crowd scenes, especially when they lift the chair up and parade around the stage with it above their heads. The other ingenious prop is a square portrait of the murdered Dmitri. Initially, this starts out as a Dorian Gray kind of device, a constant presence on the stage and an eerie reminder of how the Tsar achieved his status. But then it gradually takes on the status of an icon, initially worshipped by Grigory, who places candles in front of it as he prays, and later by the whole crowd, creating a point of focus for their growing opposition to the Tsar.
It is a simple device, but an effective one, and everything in this staging works on that level. The murder of Dmitri is enacted in mime during the prelude, and his ghost makes regular appearances from then on. Interestingly, the simpleton, who publicly accuses the Tsar in Act 3, is made up to resemble the murdered child, another of the powerful and psychologically direct ideas that characterise the staging.
The production is well cast, both dramatically and vocally. Matti Salminen portrays Godunov as a larger than life but clearly vulnerable leader. He is not the most powerful singer to have taken on the role, but that slight delicacy to his tone only increases the sense of the character's weakness. The late Philip Langridge is on excellent form as the scheming Shuisky. In an opera that is dominated by baritone and bass voices, his tenor voice fits in perfectly, with all the baritonal richness you could want, even in the upper register. But Langridge sends far more time on the stage than he does singing, and while it would have been nice to hear more from him, his arresting visual presence is just as much an asset to the role.
The rest of the cast is just as strong, and vocally the production is characterised by the even quality across the board, which given the number of singers it requires is quite an achievement. In one interesting piece of casting, Fyodor is sung by a countertenor, Brian Asawa, rather than the more usual boy treble. It is difficult to say if this adds or detracts from the drama, but his sheer vocal power brings the role up to the levels of intensity of the rest of the cast. Conductor Sebastian Weigle is best known as a Wagnerian, not least because of his fine recent performances at Bayreuth. His Mussorgsky is quite Wagnerian too, very Romantic and with some real power behind the more dramatic sections. The one aspect of the music that he doesn't relish quite as much is the driving, oppressive ostinato-type figures. His sensibilities are a little too refined for this particularly Russian form of musical brutality. However, he is a skilled operatic conductor, and he works well with the singers, giving them the space they need and maintaining an impressive balance between stage and pit, even in the louder sections.
The video direction is involving but never fussy. The camera angles are generally quite high, which works well in for the crowd scenes and is also in keeping with the perpendicular style of the sets. The sound serves both singers and orchestra well, although the ladies of the chorus sometimes sound a little shrill.
Both the DVD and the production itself, do justice to this impressive opera. The staging is in marked contrast the kind that you would expect from a Russian house, where period costumes are more usual, as is a more static staging style. The cast has a mix of European nationalities, and while there are only a few Slavs, mostly in minor roles, the Russian pronunciation is uniformly impressive.
It is customary to criticise Boris Godunov productions that use the original 1869 version of penny pinching, avoiding the longer revised score purely on financial grounds. While that may have been an issue here, there are good artistic reasons for choosing the shorter version. Two and a half hours seems long enough for any opera, and while we are still using DVDs, there are advantages to a production that you can fit on one disc. It is easy to see why Mussorgsky felt the need to even out the dramatic shape of the work, but all of the opera's best music is present in the shorter score. This production doesn't make any excuses for the dramatic disjunctions of the shorter version. Instead, it plays the individual scenes for all there dramatic worth. The production emphasises power, directness and immediacy, ideal qualities for any staging of this brutal and uncompromising work.
Gavin Dixon