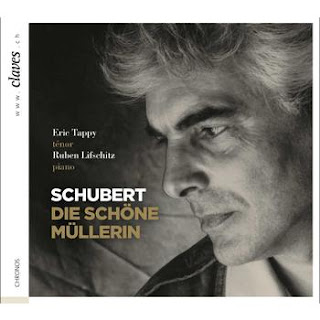 How times change. This recording of Die schöne Müllerin by tenor Eric Tappy and pianist Ruben Lifschitz was only made in 1974, but it feels like it is from a different age. Tappy was born in 1931, putting him roughly in the same generation as the first British tenors to take on Peter Pears' mantle, such as Robert Tear and Philip Langridge. His style is much like theirs, emphasising the articulation of the words over the music, and with a distinctive accent that makes the result sound almost like speaking at times.
That speech-like quality imparts a valuable intimacy to these songs, encouraging emotional engagement from the listener, while avoiding any sense of over-emotion in the performance itself. Tappy's range of vocal colours is interesting. Most are quite constrained, even reedy at times. His upper register is more narrow and plaintive than the mid-range. The low notes lack weight, but are so rare in this cycle as not to be a problem. Tappy has an impressive talent for starting a word with a plain consonant sound and then very rapidly filling out the timbre, even over the course of a very short vowel. He sings with a very narrow, even vibrato, but you have to listen hard for it. But all these musical concerns take a back seat to the articulation of the poetry, which is immaculately clear throughout. Tappy isn't a native German speaker, but he certainly sounds like one here.
There is also drama here, though not as much as I'm used to from more recent recordings. In the more turbulent movements, such as Eifersucht und Stoltz, Tappy is even more emphatic with his consonants, increasing the agogic punch without significantly raising the dynamic.
The sound quality does Tappy more favours than it does his accompanist, and the piano sound is frustratingly distant throughout. On the other hand, this may be deliberate, reflecting a different attitude to the relationship between voice and accompaniment in recordings of the time. Certainly, Lifschitz does little to protest against the subsidiary role he is allotted. He is a sympathetic accompanist though, and given that Tappy is emphasising the words so much over the music, the almost implicit status of much of the accompaniment fits well with his interpretation.
It is an interesting piece of history, and it has much to recommend it. The packaging is very elegant, especially for a reissue. Not the first choice recording for this cycle by any means, but a distinctive reading that stands up well on its own merits.
Gavin Dixon