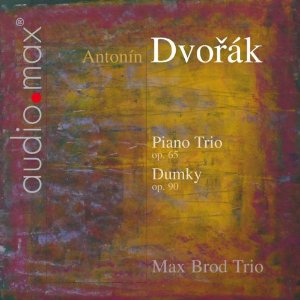 The Max Brod Trio bring a welcome sense of clarity and focus to these well-known Dvořák chamber works. The structure of the Dumky is far from clear-cut, but the players make a convincing case for its unity. And there is also a sense of intimacy that pervades the recording, as you would hope to find in all chamber music, but rarely do.

Despite its enduring popularity, the Dumky Trio poses a range of interpretive challenges to performers. Rather than structure the work as a traditional four-movement trio, Dvořák instead gives us a sequence of movements, each in the form of a dumka dance, that is a slow introduction followed by an allegro conclusion. The structure of each individual movement relies on the transition from slow to fast, which Dvořák achieves in a different way in each movement. In each case, he is relying on a sense of surprise, and it is up to the performers to deliver that without relying on undue exaggeration. Of course, nothing comes as a surprise to the players, and there is occasionally a feeling that the meticulous preparation they have put in has damped the spontaneity of these (supposedly) folk dances.
The sheer sophistication of this reading is the one aspect of it that may turn listeners off. Dvořák has taken the Ukrainian dance form (which according to the liner he first learnt of from Janáček) and transformed it for a concert hall setting. The players take that chamber music context for granted and make no effort to recapture the music's folk origins. That isn't necessarily a problem, but to me some of the charm is lost, and without those folk inflections the music risks sounding like second-rate Brahms.
The slow introductions are also more restrained than you will find in most recordings. Where many performers use the following allegro as an excuse for indulgence in each of the preceding adagios, the Max Brod Trio keep a fairly even tempo throughout, with only very controlled rubato and a sense of direction that keeps the music flowing. That allows the overall work to make more structural sense, but sometimes the slow sections seem in need of a little more space.
Curiously, the Max Brod Trio recorded this work only four years previously. That was for a different label (Arcodiva UP 0098 - 2 131) and both the violin and cello parts were taken by different players. Perhaps the work makes regular appearances on their concert programmes, or perhaps it just sells well. To me, though, this isn't an ideal performance, it is convincing foil against the many, many over-indulgent readings on the market, but only works on its own terms thanks to the high technical standards of the playing and recording.
I'm always curious about how MDG achieve their impressive results, given their avoidance of post-production manipulation. The quality of the performers they work with must be part of the answer. But whatever they do to achieve it, the sound is always good. I'm particularly impressed with the balance here, and the way that the cello provides a focussed bass sound without ever overpowering. In fact, the cello playing from Maximilian von Pfeil, is a real asset for this ensemble. It is elegant and emotive, but without ever being overstated. Chamber performance at its best.
The Op.65 Trio suits this ensemble's approach better, I think, than the Dumky. It has a more traditional form and a more involved dramatic architecture that works with rather than against their sophisticated interpretive approach. I love the way that they land running at the start of the work, fully engaging the listener from the very first note. And the quiet interludes here really benefit from the players' continuing awareness of the structural logic, a marked contrast to the rushed feeling that it gives to the Dumky adagios. Despite not being as famous, the Op.65 is a more coherent and logical work than the Dumky. It also provides a much better vehicle for the Max Brod Trio's considerable talents.
Gavin Dixon