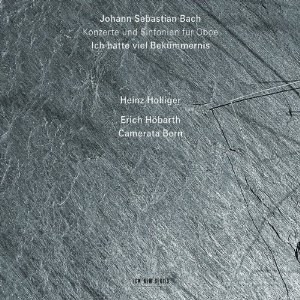 Heinz Holliger's musical activities have become increasingly diverse in recent years, and his appearances on disc have encompassed the roles of composer, conductor and even pianist. He is, of course, first and foremost an oboe player, and discs of his oboe playing do seem to make intermittent appearances, but most of these are reissues.
This disc therefore represents a return to home territory. ECM are making a big thing out of the fact that it is the first recording of Holliger playing core repertoire on the label since 1997. But the programming here is more adventurous than this suggests. Putting together a full programme of solo oboe music by Bach is no mean task. The amount of concertante oboe music that he wrote is more than sufficient but the amount that survives is less so. Or rather, the amount that survives in its original form, for the three Bach concertos here were all originally for oboe (at least in all probability) but have only come down to us in arrangements as keyboard concertos.
Given the baroque custom of rearranging works, both the composer's own and other people's, the ethical concerns of "recasting" (as Holliger would put it) concertos for different solo instruments are easily overcome. And everything works here very well on the oboe, which is the main justification that Holliger gives anyway. In one work, the A major concerto BWV1055, a single line solo part is even visible in the score underneath the keyboard arrangement that has been written on top of it. It is a bit low for the oboe, so Holliger performs it on the oboe d'amore instead.
The remainder of the programme is made up of solo oboe movements from cantatas, BWV 21, 249 (from the Easter Oratorio), and 12. There is also a concerto by Alessandro Marcello, the arrangement history of which is far from clear in the liner notes. It seems to have been written as an oboe concerto by Marcello, then transcribed for harpsichord by Bach. Now Holliger performs it, taking it back to the original solo instrument, but with ornamentation and edits taken from the Bach version...I think. It's all very confusing.
Holliger's playing is as fine as ever. His range of timbres is impressive, as is his confidence in taking the sound right down to a nasal, woody sound when the context requires. The grounded, earthy quality of his sound production is balanced by an impressively lively approach to phrasing, which always keeps the textures light.
The interplay between modern instrument and historically informed performing styles is interesting. Holliger performs on a modern oboe, so he doesn't quite have the flexibility of intonation afforded to a period instrument player by their open tone holes. And I don't know what his oboe d'amore looks like, but this too sounds a lot like a modern oboe. There is a valuable discretion in Holliger's sound production. The modern oboe could certainly project more than he does here, and would also be capable of bigger, rounder sounds, which he studiously avoids.
The orchestra, too, is a mix of new and old. There are no winds, and the strings play modern instruments with metal strings, but with baroque bows. The results sit somewhere in the middle of the aesthetic spectrum, and perhaps seems to lean more towards the modern instrument sound just because the majority of Bach recordings these days are on gut strings.
First and foremost, though, this recording is a showcase of Holliger's talents. To listen to this, you wouldn't guess he is now in his 70s, such is the agility and suppleness of his playing. A fine disc from Holliger, here's hoping there will be many more to come.
Gavin Dixon