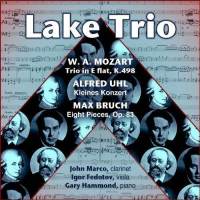 
Mozart's "Kagelstatt" Trio has made many outings on CD, but it is not often coupled with other works for the same combination of instruments. The imaginative coupling here compliments the jaunty classicism of Mozart's work with two more serious 20th century compositions. But both the Uhl and the Bruch maintain the laid back and intimate atmosphere of the Mozart, chamber music at its most approachable.
The Kagelstatt is presented here with a wonderful lightness. Tempos are generally on the relaxed side, and nothing is unduly exaggerated. Clarinettist John Marco has a warmth to his sound which sets the tone for the whole ensemble. And despite the unusual combination of instruments, the colours always blend elegantly – Mozart should take some credit for that of course, but so too should the players.
Alfred Uhl's Kleines Konzert was written in Switzerland in 1937. Technically, you'd have to describe the style as neo-classical, and there are certainly some elements of Stravinsky's abrasive sound world apparent. But most of the music has a more Romantic feel than that suggests, as if the Viennese spirit of Brahms or perhaps Zemlinsky had been spiced with just a little more rhythm and punch. Again, the performance emphasises the work's chamber music credentials, with the players creating a sense of welcoming intimacy, partly through the sheer precision of their ensemble, but also through the warm tone colours of both the viola and clarinet. This breezy, lyrical performing style belies the sheer difficulty of the music, especially in the outer movements. There are all sorts of fast figurations and scale passages here, which must be tricky for all the players, but which are performed with such elegance and grace that you wouldn't know it.
Bruch's Eight Pieces Op.83 is a more sombre affair. Seven of the movement are in minor keys and the whole work has a curiously downbeat air. But yet again, the relaxed and effortlessly melodic style of the performance comes to the rescue, with the players ensuring that the results are always light on the ear and never maudlin. There are one or two places where Bruch writes for the clarinet and viola in unison and sometimes they don't quite manage to stay in tune, but that is about the only technical problem anywhere on this disc. The recorded sound, like the performance itself, emphasises roundness of tone over specific details. The piano sounds a little distant, but nothing is really lost as a result, and the viola and clarinet are excellently represented.
All round, then, an enjoyable disc. If you are thinking of buying it, the chances are you've been attracted by the Mozart. To be honest though, the Uhl and the Bruch are just as enjoyable, and make for an interesting and satisfyingly diverse programme.
Gavin Dixon