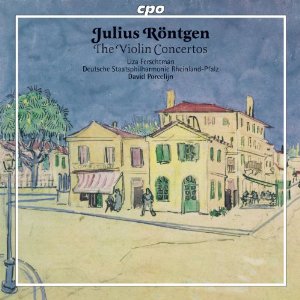 Even though Julius Röntgen has been relatively well served by recent recordings, new releases like this one often seem like surprising discoveries. Usually, you'd expect concertos by second-rate late Romantics to have competent orchestration and counterpoint, but no memorable tunes. But these concertos have all the tunes you could want. The A minor in particular has an exceptionally buoyant and attractive melodic profile. The melodies are perhaps shorter than the ones Brahms or Tchaikovsky would employ, but they are close in stature to either.
Röntgen also has an impressive knack of getting the very best from the violin. There are plenty of virtuoso passages here and all sorts of double stopping textures, which all work very well. And his orchestration is as good as anybody's, subtle too, with a wide range of instrumental combinations used to accompany the soloist, but none so exotic as to steal the limelight. That said, the use of horns is very impressive, and of the bassoons, endlessly fascinating.
CPO sensibly avoid giving numbers to the concertos, thereby avoiding long-standing confusions. Both of the concertos here have been described as the Concerto No.3 at some point, the confusion stemming from the fact that Röntgen's diaries mention that he had been working on two other violin concertos in the 1870s. It turns out though, that these were both by his wife-to-be, but they still ended up listed in his catalogue.
The A minor concerto is the best work on the disc, both the most substantial and the most consummate. It also, as I mentioned before, has the best tunes. The Ballad and the F sharp minor concerto (written for Jelly d'Arányi) are considerably later works. Both have a slightly darker tone and more passages of introverted contemplation. The contrast between the two concertos makes for a satisfyingly varied programme, and the three works together come to a generous 73 minutes.
Liza Ferschtman is the ideal soloist for this repertoire. Technically, she is on top of everything that Röntgen throws at her. She has a nimble but never narrow tone, allowing her to give the music its due sense of Teutonic weight, while also infusing every phrase with life and energy. David Porcelijn also manages an impressive balancing act, getting a performance out of the orchestra that is both restrained as accompaniment and symphonic in its bredth. I doubt the orchestral parts pose any serious problems to the players of the Deutsche Staatsphilharmonie Rheinland-Pfalz, but even so, there performance is admirable.
Good sound quality too. The acoustic in the Ludwigshafen Philharmonie is a little resonant for the violin when unaccompanied, but the warmth of the sound is ideal for the orchestral textures. A highly recommended release, providing the best possible advocacy for a composer who we should really hear much more from.
Gavin Dixon