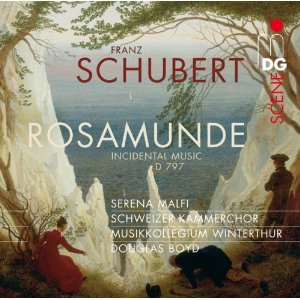 Douglas Boyd and his Winterthur forces are proving to be a reliable signing for the MDG label. This disc follows an excellent recording of the Rhienberger organ concertos. In both cases, we are talking about music that has made very few outings on CD, let alone SACD, so to find them presented at this quality is a treat.
Schubert, according to the liner note, put great energies into improving his reputation as a composer for the stage, but of the ten stage works he completed, only three were preformed in his lifetime. Rosamunde was one of them, and its poor reception was apparently one of the reasons why later stage projects failed to find a home. Problems with the work's dramaturgy have been blamed for its failure, rather than any inadequacies on the part of the music. And the music is good. It falls somewhere between the Schubert the chamber composer and Schubert the symphonist. There is plenty of drama here, but for the most part it retains the civilised formality of the Classical era. Performing the incidental music – and great as it is, the word 'incidental' is definitively appropriate – poses a few challenges. A choir is required, but they only put in a few appearances, as does the alto soloist. Schubert writes trombone parts, but he only uses them to support the choir. So the whole project is a bit impractical, and while you need a range of talented musicians, none is given the opportunity to really show off those talents.
Fortunately, the Musikkollegium Winterthur musicians have what it takes. There is some elegant woodwind writing, all of which is beautifully presented. And those trombone parts, brief as they are, are played with enviable precision and tonal focus. Douglas Boyd achieves a good balance between the composer's aspirations to drama and his innate sense of musical elegance. There are a number of points where the music builds up to a thematic statement through a swell on an upbeat or a short crescendo, and Boyd is able to create just the right sense of anticipation, and without excessive intervention.
It is probably worth noting that this is very much Schubert on modern instruments. There is nothing wrong with that, of course, but it seems to be rapidly becoming the exception rather than the rule. The textures are warmer and more homogeneous than you get from period instruments, but (unlike in the later symphonies for example) there is little in the way of contrapuntal or textural detail to loose in the textures. That also limits the potential benefits of the SACD audio. The audio quality is good, and it brings a sense of warmth and intimacy to the quieter textures, especially the woodwind solos, but there is little in this score to bring out in terms of pertinent details.
The disc opens with a bonus track of sorts. It turns out that Schubert wrote the Rosamunde music to a tight deadline and did not have a chance to write an overture. Instead, the programme opens with the overture to "Die Zauberharfe". The liner note ensures us that the overture is very much in the spirit of the Rosamunde music, and so it is. However, the Rosamunde movements are thematically interconnected (though a theme better known from the quartet of the same name), the overture does not share this link and so stands out from what follows. That's not a big grumble, but it does call the logic of the programming into question. Even with this imported overture, the running time is still under an hour. So why not include a few more overtures and incidental movements too?
Gavin Dixon