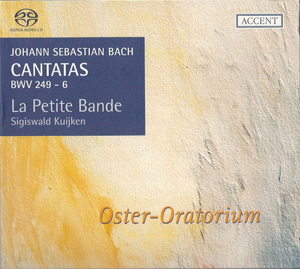 Sigiswald Kuijken is coming to the end of his Bach pilgrimage, which is taking in one cantata for each Sunday of the liturgical year over a five year period. It hasn't quite managed the same high profile as similar projects by Gardiner or Suzuki, nor indeed has Kuijken achieved the same uniformly high standards as those eminent conductors. His is a more idiosyncratic cycle, and I have had some reservations about the previous instalments. Each disc is recorded in superior SACD audio, but the precision of the engineering is not always matched by the performing style of the orchestra, and the sound has often been merciless in highlighting suspect tuning in the strings and occasional balance problems.
That dichotomy is evident on this disc, of cantatas for Easter Sunday and Monday, with the tight focus of the engineering often at odds with the laid back style of the performance. Fortunately, the technical side of the performances here stand up to the forensic scrutiny of the audio, which finds little wanting. On one occasion there is some loud rattling of woodwind keys, which, considering we are talking about baroque instruments, can only be coming from the bassoon. And one of the arias is accompanied by a tenor/bass string instrument, which the orchestra list suggests is Kuijken himself on the violoncello da spalla; an exotic choice of instrument but not a particularly pleasant sound.
Otherwise, the timbres and textures are all very pleasing and easy on the ear. This might be explained by the fact that both of these cantatas, and BWV249 in particular, emphasise the wind over the strings in most of their movements. And the woodwind playing is very good indeed. The players are just as relaxed in their style as the strings, or at least give that impression while playing with both precision and passion. Both recorder and flute are used, the one player alternating, and both give elegant woody colours. The three trumpeters manage to combine flair and restraint to a degree that is all too rare. It is also worth mentioning that they play "fully natural" trumpets, ie without vent holes. That's usually a recipe for some dodgy tuning, but all the trumpet lines here are spot on.
As ever, Kuijken works in one-to-a-part mode with no choir. Joshua Rifkin would, no doubt approve, but the four soloists have to work hard to give these boisterous scores their due. The first chorus of the Easter Oratorio (Kommt, eilet und laufet ihr flüchtigen) in particular sounds to me like a work for large choir, and while the singers give us the contrapuntal lines with valuable clarity, the chamber textures seem at odds with the spirit of the score.
No such concerns with the solo movements though, and each of the singers really makes the most of their various moments to shine. Alto Petra Noskaiová and bass Jan Van der Crabben are both competent purveyors of the Bach's solo lines. Neither excels, but the evenness of their singing has a value in itself. In particular, the fact that Crabben sounds equally at home in every part of Bach's bass register is an asset, and sets him apart from the bass soloists in other recent Bach cantata cycles. But both are outclassed by soprano Yeree Suh and tenor Christoph Genz, who both put in some very special contributions. Genz demonstrates that you don't need to be in the very highest register to give a characterful and passionate tenor performance. Suh has an extraordinary voice, very pure and uncomplicated. She often sounds like a boy treble, and her sound might provide some welcome nostalgia for those who fondly remember the days when these top lines were always taken by boys' voices.
Sigiswald Kuijken has his fair share of admirers, who are likely to find much of this recording very much to their tastes. The woodwind playing and the soprano and tenor arias in particular are up to the highest standards of this cycle. But, as with previous instalments, it is a mixed bag, and not everything hits the mark. That is a consequence, I suppose, of Kuijken's easy going approach, which at its best combines spontaneity with a sense of intimacy that fully justifies the use of a minuscule ensemble (a Petite Band indeed). Personally, I'd go for Suzuki or Gardiner every time, but if you find their readings too regimented and too detail-focussed, then Kuijken might just be the man for you.
Gavin Dixon
This review first appeared at MusicWeb International:
http://www.musicweb-international.com/classrev/2011/June11/Bach_Accent_ACC25313.htm