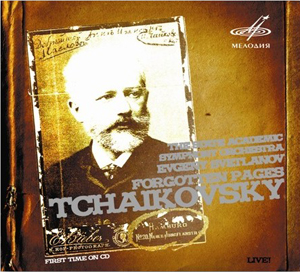 Buy from:
How 'forgotten' are these 'Forgotten Pages' from Tchaikovsky? The Storm and Hamlet are not his most famous works, but both get occasional airings, both on CD and in the concert hall. Fatum and the two dances at the end of the programme (both of which are extracted from opera scores) are more unusual offerings. But the composer's skill shines through each of these works. Their melodies are perhaps a little less memorable than his best, and the dramatic structure of the three tone poems is not as focussed as in his finest scores, but this is still great music.
The lack of opus numbers on the sleeve could lead to some misunderstandings. With that in mind, it is worth stating that the first track, The Storm, is Tchaikovsky's Op.76, an early work that was only performed and published posthumously (and not his Op.18, which goes under a similar name). There is plenty of drama here, but the narrative dimension (the work is based on a play by Ostrovsky) is more difficult to pin down. Fatum has no such aspirations to narrative structure, as so fares better. It is another early work, but the composer's skills in melody and orchestration are again evident. Hamlet is famous enough, I think, to justify a higher place in the billing, and even a mention on the front cover. Then there are the two dance movements on the end, which after such dramatic tone poems, do feel like light fillers to pad out the programme.
The recording was made in 1990, and while the political structure of the Soviet Union may have been tumbling down around the players' ears, the tradition of Soviet performance is still very much in evidence in their playing. Everything is very strident, the brass have a brash but narrow tone, the woodwind soloists play exactly on the beat, and the strings always play with a sense of determination, although that doesn't prevent them from taking flight in the few sweeping, romantic melodies they are allotted. Svetlanov drives everything on, giving a sense of inner purpose to the music that often compensates for its lack of formal structuring.
Surprisingly given the date, the recording is analogue. The sound quality isn't bad, but it is certainly not the best that Soviet engineers could manage at the time. The string sound could do with more clarity, and the back of the orchestra always sounds frustratingly distant. The recording was made live, without a second take or patch session, and while the orchestral playing is certainly good enough to justify its release on CD, the concessions that must be made for the sound make the project a little more questionable.
Not that the audio should prevent anybody from paying the reissue price they are asking for this disc. (Is is a reissue? It claims on the cover to be the first time on CD.) Russians love anniversaries, and the stated justification for the original concert was to mark the 150th anniversary of Tchaikovsky's birth, while the (re)issued recording marks the 170th anniversary. Twenty years down the line, we also have another Russian legend to commemorate, Svetlanov himself who died in 2002. And this is classic Svetlanov: focussed, driving, energetic, and above all, deeply Russian.
Gavin Dixon

CORRECTION
It seems the identity of the first track on this disc is even more problematic than I had previously suspected. A reader has written in pointing out another review which identifies the work as the Overture in C Minor. Examination of the scores reveals that this is indeed the case. The mistake on the track listing may be a result of the fact that the two works, the Overture in C Minor and The Storm Op.76, share themes and have almost exactly the same opening. This may come as a disappointment to Svetlanov fans, as he has recorded the Overture before but not The Storm. Apologies then to anybody who thought this was a significant new find in the, now sadly finite, Svetlanov discography.