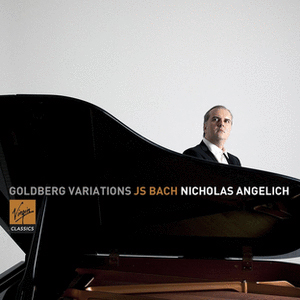 Buy from:
Whenever I have heard him in the past, Nicholas Angelich has seemed like a very heavy-handed pianist. Everything about his playing is strident and confident, not percussive as such, his sense of phrasing and legato is developed enough to avoid that accusation, just heavy. That sort of approach works well enough for Brahms, his recording of the Second Concerto (50999 266349 2 0) is excellent, but he only has to take it back as far as Beethoven and the textures begin to get swamped by the sheer weight of his playing.
How then will the Goldberg Variations fare? Surprisingly, the answer is that on the whole it works fine. His assertive style is everywhere evident, but not everything is loud. In fact, he seems to exaggerate the quieter dynamic to balance out his more boisterous dynamics in the louder movements.
At 5:20, the opening aria is on the slow side. The duration is partly explained by the fact that he observes the repeats, but even so it is also very slow. He plays the opening chord and then there is a pregnant pause as you wait for the second, it feels like forever. After a few bars, the ear becomes accustomed to the pace and the music takes on a feeling of momentum, without actually speeding up. In fact, Angelich is fairly disciplined with his tempos, and while this is a Romantic reading in most senses, the stability of the tempos in each individual movement compensates for some of the indulgences of dynamic and articulation later on.
When the variations proper begin, Angelich's trademark heavy touch begins to make itself apparent. With the exception of the quieter variations, the playing throughout is forceful and confident, but always flowing and lyrical. Angelich lifts many of the textures through carefully judged details. The relationship between the written notes and the ornaments, for example, is fascinating. By presenting the written notes with such surety, he is able to contrast the ornaments, which are usually lighter and often very slightly belated. That's a nice touch, although perhaps the contrast is a little heavy.
Something else that is very heavy is Angelich's bass lines. The question again arises over whether they are appropriately articulated of just heavy-handed. I would inclined toward the former, especially given the structural significance of these bass lines, and the fact that most other pianists emphasise the melodies to the detriment of left hand clarity.
The recorded sound suits Angelich's playing. The liner doesn't mention what piano is used, but it has a warm, round sound and plenty of power towards the bottom, ideal for showing off this pianists strengths. The recorded sound emphasises atmosphere over pinpoint clarity, but there is no excessive resonance, and Angelich ensures that every line of the counterpoint shines through.
Bach isn't the sort of repertoire that you would expect to benefit from Angelich's Lisztian pianism, but there are a surprising number of insights here that more timid pianists, let alone harpsichordists, don't quite manage. That combination of lucid, legato phrasing and confident keyboard technique deliver satisfying, and always musical results. But musical as it undoubtedly is, I would struggle to describe this recording as subtle. However, if like me you feel that there is too much subtlety in most Bach interpretation these days, Angelich might just be the man for you.
Gavin Dixon