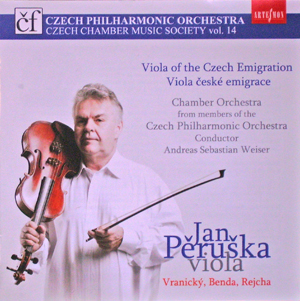 Czech viola concertos are something of a rarity on CD. The three presented here are all by Czech composers working abroad in the 18th century. Antonín Vranický and Jiří Antonín Benda were both based in Vienna, while Josef Rejcha settled in Bonn. As with so many Czech musicians of the 18th century, these three men appear to have integrated seamlessly into the Germanic traditions of their adopted cities. Vranický and Benda, bring a bold and forthright melodic style from the music of their homeland, but balance this well with a Viennese sense of sophistication and restraint. Rejcha, who as kapellmeister in Bonn was one of Beethoven's first teachers, is closer to the Mannheim school, bringing French and German influences into the mix. The Rejcha concerto also sounds a little like Mozart at times. Like Mozart he is has a valuable lightness of touch, which prevents the formality of the 18th century musical rhetoric from ever weighing down the music.
Jan Pĕruška performs the concertos with sensitivity and imagination. He is not the sort of viola player to try to make the instrument sound like a violin. Instead, he maintains a rich and grounded tone. There is plenty of variety in his sound, and he is always able to dominate the textures without ever having to force his tone. His ornamentation is modest and the cadenzas (by Matĕj Kroupa) are lively but never extravagant.
The orchestra, which is made up of members of the Czech Philharmonic, put in a fine performance. It is a modern instrument performance, but the sensitivity to nuances of phrasing and dynamics, from soloist and orchestra alike, suggests a certain influence from period performance practice. The versatility of the orchestral players is impressive, and all too rare. Very often, a chamber ensemble with players drawn from members of a symphony orchestra just sounds like a symphony orchestra with some of the players missing. This, by contrast, sounds like real chamber music, and the music of all three composers benefits immeasurably from intimacy and precision of the ensemble.
The sound quality is reasonable but not exceptional. The Rudolfinum has a long and venerable history as a recording venue, but usually imparts more resonance and warmth to the sound than we find here. A little more detail in the orchestral textures would also be welcome, although the soloist himself is well represented in the mix.
Those slight reservations about sound quality aside, this is a fine recording. The works presented are not ones you are likely to meet very often, marginal as they are to the world of 18th century music and even to solo viola music. But they are interesting enough to deserve the outing, and Pĕruška gives them a lively, sensitive and stylistically astute performance.
Gavin Dixon