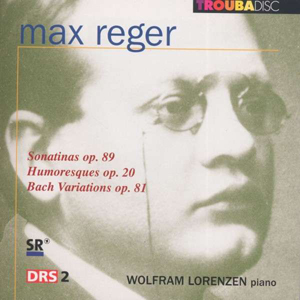 Reger's piano music is a mix of small and large. This disc gives a taste of both, with two Sonatinas and five Humoresques occupying the first half of the programme and a second half devoted to the monumental Bach Variations.
The contrapuntal intricacy asociated with Reger is apparent in many of these movements, although simpler textures are also common, especially in the Sonatinas. Reger's adventurous harmonies are also evident in most of the works, but especially in the variations. The Sonatinas and Humoresques have a sense of lightness that is in direct opposition to Reger's dour reputation. True enough, the music occasionally gets too involved for its own good, and the main difference between these short works and similar music by, say the young Brahms, is the lack of memorable melodies. Perversely though, that lack adds a certain quality of its own, it means that the ear is not distracted by catchy melodic lines, and can concentrate instead on the subtle and variegated piano textures.
Reger was, after all, a concert pianist, and he clearly had a good ear for the instrument's capabilities. Working in the 20th century meant that the instrument he had in mind was closer to today's grands than anything Beethoven, Schumann or even Brahms would have known. So when he wants to put some weight into climaxes, or even sudden sforzandos, he can rely on the instrument itself to provide the drama. He often helps it out by adding octave doublings, but these are always skilfully integrated into the contrapuntal textures.
As its title suggests, "Variations and Fugue on a Theme by Joh. Seb. Bach" owes a great deal to Brahms. Comparing Reger with Brahms always seems to me unfair on the later composer, but here more than anywhere else, Reger seems to be actively inviting such comparisons. Reger's harmonies are a little more adventurous than those of Brahms, and he also has a tendency to fragment the theme in ways the Brahms would usually avoid. But like Brahms, Reger is able to maintain the beauty and identity of the Bach theme (taken from the cantata Aus Christi Himmelfahrt allein ich meine Nachfahrt gründe BWV 128) to retain a strong sense of identity across this long set. And the fugue at the end forms an impressive and stirring conclusion.
Wolfram Lorenzen gives excellent performances of these works. He achieves impressive clarity, even in Reger's densest textures, but never at the expense of the music's drama. Reger includes a large number of dynamic indications in his piano works, and Lorenzen sensibly takes these more as a guide than as gospel, but always shaping the music in the way the notated dynamics suggest.
The recording was made in 1992, although this is, I suspect, its first release. The sound quality is good but not exceptional. The dry acoustic suggests a studio environment, but the piano sound is boomy in some registers, especially at the bottom. Nevertheless, an enjoyable recording, and a valuable introduction to one of the most neglected areas of this still scandalously neglected composer's work.
Gavin Dixon