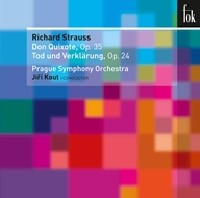 Richard Strauss with a Czech accent? Well yes, up to a point. Some aspects of this recording are typically Czech. The brass sound is punchy and focussed, while the woodwind soloists have a wider, warmer sound. The passionate playing from the orchestra is also typical, and is what really makes this recording come alive. In truth, this recording is a product of cosmopolitan times, and at a blind listening I would be hard pressed to locate its country of origin. But the standard of performance is excellent – really a world-class offering, whatever its source.
Jiri Kout directs Don Quixote with playfulness and humour. It is a dramatic score, but on a comic theme, so it is just as well that the dramatic climaxes are not treated like Mahler. It is certainly dramatic enough, but the quieter passages, and the concertante passages in particular, are treated as the main focus. And the soloists all shine, particularly Milos Jahoda, representing the knight himself on the cello. A little more power in the bottom register from would have been nice, but otherwise this is an ideal reading. The sound engineers haven’t gone to great lengths to distinguish the soloists from the ensemble, or if they have they have covered their tracks well. But Jahoda is able to dominate the orchestral textures from within, which really helps this multifarious score to cohere. The woodwind soloists are a great asset to this orchestra, and Strauss puts them through their paces. The freedom that Kout affords them gives them all the space they need, but without ever compromising the symphonic flow of the music.
Death and Transfiguration is a curious coupling, but this recording of Strauss' relatively neglected tone poem is a valuable addition to the catalogue. In fact, the pairing works well, because the same high performance values are brought to both works, as well as the same stylistic sensitivity to Strauss' textures. And while the atmosphere of the two works is very different, the fact that both are presented in such an immersive way means that, as a listener, it is very easy to move straight on to the more sombre textures when the second work begins.
The strings are the focus of attention for most of Death and Transfiguration, and for the most part they do very well. There are one or two slightly shaky moments for the strings in the opening pages of Don Quixote, which are made all the more apparent through comparison with the note-perfect soloists when they enter. But the strings put in an excellent performance in Death and Transfiguration. The sombre textures are dark and substantial, while the dizzying climaxes are all swirling and ethereal.
The sound is good, although it emphasises atmosphere over detail. The recordings were made at live performances in Prague. You don't hear a peep out of the audience, and the only reason you would know that they were there at all is from the muted and brief applause that is included at the end of the second work, although not the first for some reason. The string sound in Death and Transfiguration deserves slightly closer micing, but the winds and the string soloists all cope well in this acoustic environment.
The tone poems of Richard Strauss are great vehicles for showing off the prowess of orchestras, and the Prague Symphony Orchestra do themselves proud here. Their sound may or may not be distinctively Czech, but it is identifiably Central European. To bracket the orchestra with its more famous Austrian and Eastern German contemporaries is to do it no disservice. Many of them would be proud to have made this recording.
Gavin Dixon