Hosannas of the Second Heaven 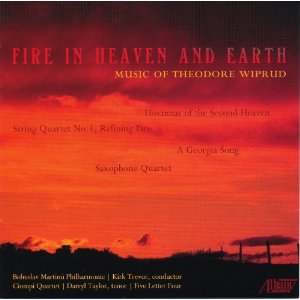 This fascinatingly diverse sampler shows the many faces of composer Theodore Wiprud. We have an opulent orchestral prelude, an acerbic string quartet, a jazzy vocal setting and a punchy saxophone quartet. Wiprud is clearly open to a wide range of musical ideas, and each of these works draws on different influences and musical cultures. It all feels very contemporary, but not in an avant garde way, rather in its up to the minute reinvention and combination of established musical styles and ideas.
Wiprud himself considers his music to draw on both American and European models. He studied with David Del Tredici at Boston University and later with Robin Holloway at Cambridge. It is difficult to imagine a finer neo-tonalist pedigree. I have to say that from this side of the pond, the music all sounds very American. If there is an influence from Holloway it is in the messiness of some of the textures. In the orchestral piece "Hosannas of the Second Heaven", the textures are constructed along post-minimalist lines, with repeated notes and figures building into larger textures. But you wouldn't mistake this for John Adams, everything is denser and more fractured.
That said, John Adams and the other composers of his generation are clearly influential. The "Americanness" of this music comes through, to me at least, through reminiscences of other American composers: Adams as mentioned in the orchestral work, Bernard Herrmann in the string quartet which calls to mind the score for Vertigo, and Gershwin in the song setting and the saxophone quartet. These last two works bring in jazz influences, but like Gershwin do so with the utmost care, achieving a skilful stylistic balance that prevents the music from seeming like voyeuristic crossover.
The question of tonality is a tricky one. According to the liner, Wiprud employs a "freely tonal approach to harmony". That's very true, but doesn't tell us very much about how his music sounds. If it is intended to reassure us that there are no crashing dissonances here, well that is true as well. He has an impressive knack for constructing harmonies that are slightly acidic, without resorting to excessive density or dissonance. His String Quartet No.1 "Refining Fire" is the best example of this on the disc, and to my ear the most accomplished work here all round.
The question of jazz is also a tricky one. In "A Georgia Song", Wiprud sets words by Maya Angelou. Wiprud writes "How can a white composer offer an authentic musical response to African-American poetry rooted in a history of striving against oppression?" His answer seems to be to write some heartfelt vocal music and to accompany it with a jazzy sax obbligato. In fact, the sax part isn't just jazz pastiche, but its very presence allows a certain sense of cross-cultural, not to mention cross-racial, engagement. Wiprud is able to draw on the excellent example of George Gershwin when wrestling with these questions, and if the results often sound close to Porgy and Bess that is no bad thing.
The performances and recordings are all good. The Czech-based Bohuslav Martinu Philharmonic Orchestra cope well with the often unusual textures that Wiprud expects from them. The Ciompi Quartet play with energy and passion. There are one or two slight tuning problems in the string quartet, but nothing serious. Tenor Darryl Taylor maintains the interest in the Angelou setting, and the Saxophone Quartet is giving a clear and bright reading by the group Five Letter Four. All round, this is a very interesting disc, presenting a composer who surely has many more interesting projects to come.
Gavin Dixon