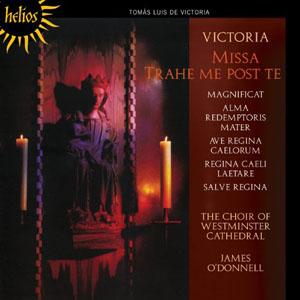 Hyperion's series of Westminster Cathedral Choir reissues just keeps getting better and better. Victoria is, of course, core repertoire for the ensemble, and they sing it as well as anybody. In fact, the performances here are superior even to the recent Palestrina reissues in the same series, which is saying something, because they too are about the best recordings of that composer's work you'll find anywhere.
If you have heard any recording of the Westminster Cathedral Choir before, then you'll know what you are getting. The way they are able to clearly articulate the counterpoint, while always maintaining an even tone, sets them apart. The tuning of the boy's voices is an occasional problem in these recordings, but not here (an organist is credited so perhaps he helped keep the pitch but you don't hear a peep from him on the recording). Also, the clarity of the inner parts is sometimes compromised on other discs, but again there is no sign of that problem in this recording.
The main piece on the programme is the Missa Trahe me post te, as good a mass as any from Victoria's catalogue. It is a parody mass, based quite loosely on his motet of the same name, which opens the programme. The mass is in six parts, although apart from the Agnus Dei it is effectively written in five. Not the most expansive of Renaissance choral writing then, but the choir sing it for all it is worth, lending weight and depth to the textures, and without over-complicating the simpler ones.
They leave the best until last. The disc concludes with five antiphons, two for five voices and three for eight. It is these eight part double choir works that impress most. The penultimate track, Slave Regina, has it all. It starts with just a single boy's voice, before gradually opening out to include the whole of one of the choirs. Later sections introduce the two choir textures, and various forms of interplay, both grand and intimate. It is like a catalogue of the contrapuntal techniques of 16th century choral music. And, needless to say, the performance is superlative.
A highly recommended disc then, especially at this budget price. Palestrina is the biggest name in choral music from this period, and Hyperion's Westminster Cathedral Choir reissues have so far been dominated by the more famous Italian's work. Victoria compliments Palestrina well, perhaps not as grand or imposing, but in these recordings, the balance between the individual lines of the counterpoint and the overall effect is more stimulating. Simpler textures are perhaps the key, but that is not to say that Victoria's music is simple. Direct is perhaps a better word, and in this recording that directness shines through, imbuing the myriad contrapuntal devices focus and meaning.
Gavin Dixon