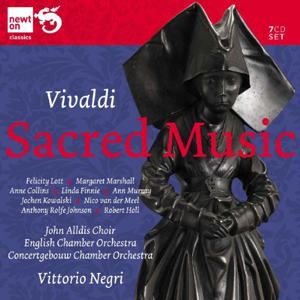 Buy from:
It may seem ungrateful, but my first reaction listening through this box set of Vivaldi sacred music was that there is just too much of it. 457 minutes of this stuff, which even its advocates would agree, all sounds very similar, is more than the mind can comfortably contemplate. Presumably, Newton Classics bought the rights as a job lot, and from a financial point of view it would have made little difference if they had only included three or four discs. Even so, there are some technical problems with the reissue and a frustrating lack of information in the liner, both of which may have been resolved if the same money had been invested on a shorter programme.
The recordings themselves are good. Italian conductor and musicologist Vittorio Negro was considered an authority on Vivaldi back in the 1970s, and it is easy to hear why. Without any particular concession to the then fledgling period performance movement, he directs performances that have energy and sparkle. His vision for each movement and work is easily communicated thanks to the high performance standards of the players and singers. The unity of the string section is rarely in question, and the choir, whilst they sometimes become a little blurred in the inner parts, never fail to clearly articulate the counterpoint.
The list of soloists reads like a who's who, and listening to these discs back-to-back the individual identity of each of them really becomes clear. Solo movements for ladies voices (or at least taken by female singers) predominate, so there is more here for fans of Margaret Marshall and Anne Murray than for those of Anthony Role Johnson.
The first five discs date from 1976-1980, while the last two were recorded in 1991. It is a testament to the quality of the 1970s analogue masters that there is no perceptible difference between them and the later digital ones. The engineering quality of the originals is explained by the fact that the recordings were made by Phillips. The earlier recordings have been the subject of at least one re-release on the original label, perhaps to coincide with the release of the later ones, but Universal has clearly decided that their earning potential has now declined to the point that licensing to a budget label is their most useful role.
This isn't the place for aesthetic ideology, but it has to be said that if these discs were released on the Phillips label today, they would seem hopelessly dated. The period performance movement now has such a hegemony over the core Baroque repertoire that even modern instrument recordings show the influence of those performance techniques. And great as these recordings are, it often seems, at least to my 21st century ears, that I'm listening to Elgar. Some people still have a taste for this sort of Vivaldi, but even so, it does raise the question of what, or who, this reissue is intended for. The encyclopedic nature of the programming suggests it is aimed at listeners who want to cover the broadest Vivaldi repertoire. But they are not well served by recordings that don't acknowledge the developments that have been made in performance practice and scholarship in recent decades.
And even listeners attracted by the nostalgia value of these recordings are going to be frustrated by the production values of the reissue. The liner essay is about the works rather than the recordings, and there is only so much you can say about eight hours of music in three and half small pages. The track listing only gives the initials of the soloists for each work, requiring frustrating cross-referencing between the pages. There is no indication of which recordings are analogue and which digital, admittedly obvious for recordings made in 1977 and 1991, but what about 1980?
The most serious problem is the mastering flaws on the discs themselves. There are silent gaps midway through movements, and at least one of the discs has tracking problems towards the end, causing it to skip. I'm not sure what the cause is of these problems, but I'm sure that financial constraints play a part. Like many budget reissue labels, Newton Classics works on the principle of the greatest possible duration for the lowest possible cost. In these straightened times, that is one of the few business models left with scope for even a modest profit margin. Even so, the long-term viability of the whole concept it surely dependent on customer satisfaction, so there is definitely a case for raising the price by a few pounds if that will raise the standard of the product to a minimum threshold of quality.
Gavin Dixon