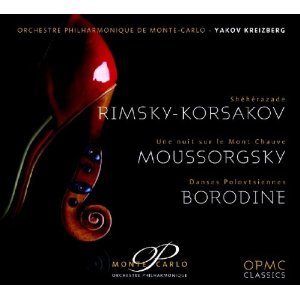 There is something slightly macabre about the gradual release of final recordings after the death of a major artist. Yakov Kreizberg, in his relatively short career, managed to build up a respectable discography, although for some reason he never seems to have veered far from the core repertoire favourites.
No surprise then, that one of his final discs should be a selection of Russian lollipops. The disc is released on OPMC Classics, the newly founded label of the Monte Carlo Orchestra. Its packaging is interesting. The whole orchestra appears in four different photographs, giving the players more exposure than most orchestra own labels manage. There is also a photo of Princess Caroline, taken by, or at least credited to, Karl Lagerfeld. Diaghilev makes an appearance, presumably more for his links with Monte Carlo than with the repertoire. All round it is a glitzy affair, as you might expect from the principality.
The performances are serviceable but nothing special. Kreizberg brings a valuable Russian sensibility to this core repertoire of his homeland. Everything is deeply felt and nothing is trivial. But the readings are as safe as the repertoire choices, and given the hundreds of recordings that are already available of the three works, there is little here to make this one stand out.
There is also a curious lack of momentum, which is especially apparent in the movements where it is really needed. The second movement of the Rimsky-Korsakov is slow and lacks drive, almost to the point of grinding to a halt in places. A Night on Bare Mountain also gets a very relaxed reading, a welcome antidote to the excesses of some conductors, but not exactly inspiring.
Amongst the orchestral sections, the strings come off best. They have a lush, even tone and are able to fill out the textures to maintain the life even when the momentum drops. The woodwind and brass are less impressive, the woodwind struggling with tuning in places and the brass losing tonal focus in the louder passages.
Not Kreizberg's finest hour then, and not the sort of recording to do his posthumous reputation any favours. He is certainly a conductor we are going to be talking about for a long time yet, but conversation is more likely to focus on his PentaTone recordings with Julia Fischer than on this.
Gavin Dixon