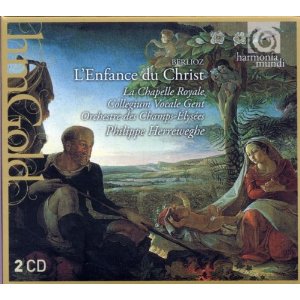 Why is it that Berlioz works so well on period instruments? A wide range of period instrument approaches to his work is available on disc these days, from the relative austerity of Norrington at one extreme to the lush Romanticism of Herreweghe at the other. I suspect that Berlioz' mastery of orchestration is the answer. The notes fit the instruments so well, especially the grainier sound of 19th century instruments, that interpreters have plenty of room for manoeuvre when it comes to putting their own stamp on the results.
Herreweghe goes for warm, round sounds throughout. His orchestra and choir are relatively large, but this never threatens either the ensemble or the intonation. It is not immediately obvious that this is a period instrument performance, such are the tone colours and the general openness to expression. But the lack of vibrato in the strings and the nasal quality of the horn sound soon gives it away. The woody sound of the bassoons and the focussed trombone sound are also highlights of the orchestral playing. In fact, the period instruments allow Herreweghe to achieve an ideal balance between the pastoral and dramatic elements of the score. He doesn't need as much volume in the louder passages to put the drama across, so everything fits more easily into the small-scale cantata format than it otherwise might.
The singing too is intimate and approachable throughout. The lion's share goes to Paul Agnew, who does a brilliant job as the reciter. The clarity of his diction is ideal, and his French pronunciation is so idiomatic that you wouldn't believe he is the only soloist in the lineup who is not a native French speaker. The choir are also on top form, and despite the large size of the vocal ensemble, all their choruses and carols have an endearing sense of immediacy.
The quality of the recorded sound is a significant factor here. The recording was made live at a concert in the Stravinski Auditorium in Montreux in 1997. Presumably the choir was at the back of the orchestra, but the placement of the microphones is ideal for them and for the rest of the ensemble. Again, the proficiency of the orchestration is an important help in the clarity and coherency of the sound, but the quality of the engineering must be just as important in achieving the result.
The release is a reissue on Harmonia Mundi's hmGold label. As ever, HM strive for the highest production standards, even for the re-release market. So the packaging is handsomely furnished with some elegant illustrations, a full list of performers and a libretto in French, English and German. I don't think they have had to change very much from the packaging of the original 1997 release, yet the result feels impressively contemporary.
Just one grumble about this and other recent volumes of the hmGold reissue series – it is difficult to tell from the packaging that it even is a re-release. The word "Gold" is the give-away, but finding any other information takes some detective work. The date and location of the recording are only given on the back cover of the liner and only in French, and there is no information at all about the original release. Obviously, there are important sales motivations behind this conceit, but it is not necessary. The recording is excellent, and at this price is undoubtedly a bargain. The fact it is 14 years old and has been released before shouldn't put anybody off.
Gavin Dixon