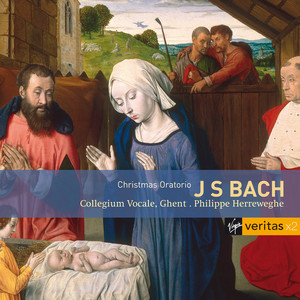 As you might expect, Herreweghe's account of the Christmas Oratorio is as authoritative as any. His orchestra and choir are lively but always precise and his soloists all excel. But most impressively, Herreweghe is able to marshal his impressive forces to create a whole that is greater than the sum of its parts. The Christmas Oratorio isn't the most coherent of Bach's works, but Herreweghe brings it all together, not so much by imposing architecture as by maintaining the flow of the music and not letting any single movement stand out too much from its surroundings.
The general mood of this performance is surprisingly relaxed. Even from the outset, the solo timpani in the opening bars sound curiously flaccid, and the orchestral and choral textures that follow are warm and round rather than punchy and focussed. The use of such a large choir in a period performance is unusual, but their precision and agility more than justify the numbers.
The number of orchestral players is not given, but the string section also sounds relatively large. The wind soloists put in some great performances, but Herreweghe always makes sure that the obbligato lines are subservient to the solo voices. Marcel Ponseele plays first oboe, and with more restraint than on Kuijken recordings. He also spends a fair proportion of the work playing oboe d'amore, and it is great to hear a virtuoso performance on that unduly neglected instrument.
The vocal soloists form a well-matched group. In keeping with this relaxed performance, none is required to take anything to excess, giving the recitatives, and especially the arias, an almost conversational feeling of flow. The lion's share of the vocal work goes to Howard Crook as the Evangelist, and his light but characterful voice is ideal for the part. He often introduces solo numbers by the other singers, and each time, the timbral similarities between them make for an almost seamless transition. In any other context, these vocal performances could be criticised for lack of power and projection, but here the performances are ideal. Fans of Michael Chance and Peter Kooy might want to track this recording down for their performances. In 1989, both men were at the hight of their powers, and Herreweghe makes sure he gets the best from both of them.
So why the relaxed tone in so much of this music? Well, by reducing the musical drama, Herreweghe is able to present the Oratorio as a more coherent entity. Also, the continuously celebratory major music that makes up so much of the work can get monotonous when presented in more boisterous recordings – introducing a sense of intimacy and poise creates more variety if nothing else. The recording also cleverly counters a range of stereotypes about the period performance movement. The idea that such ensembles are always small, always play fast and always go for spiky, angular sonorities, is countered by every aspect of this recording. The choir and orchestra are large, the tempos are relaxed, and the sound is warm. Herreweghe has plenty of austere period performance recordings to his name, but he is clearly open to other ideas as well.
Gavin Dixon