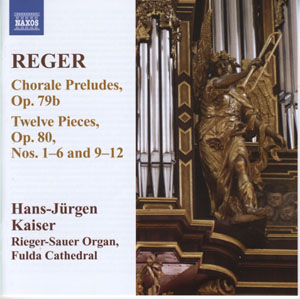 The Naxos Reger organ music cycle must be approaching completion if it has reached volume 11, not that it has been a cycle in any integrated sense, using as it does different organs and different organists throughout. Even so, it is an admirable endeavour, and even though Reger struggles to find an audience in the English speaking world, respect for his music among organists runs high.
The programme here is made up of two sets, ten of the Twelve Pieces Op.80 and the Thirteen Chorale Preludes Op.79b. Opus numbers in the high 70s and low 80s place these works around the beginning of the 20th century, which for most of his composition was a period of dense counterpoint and experimental harmony. But there is little of either here. All the works on this programme appear to have been written for liturgical use, and (unlike Messiaen) Reger has no intention of challenging the musical tastes of the congregation. There is chromaticism in the sense of chromatic descents in the pedals and chromatically ascending sequences, but that's not the same as atonality as such. Even so, just because the music is comfortable, that doesn't mean it is uninteresting. Reger's flair for counterpoint is everywhere apparent, and he has a remarkable feeling for what works well on the organ, to the extent that not a single note seems wasted.
Reger only specifies the registers he has in mind for each movement, rather than prescribing specific stops. Perhaps he is assuming that, given the gentle character of most of this music, the organist will play it safe. That is certainly what happens here. There are occasional loud moments, like at the end of Op.79b No.11, but even here the choice of stops is quite conservative in terms of the round sounds they all produce. A little more contrast would have been nice in the Chorale Preludes between the chorale theme, usually in the right hand, and the counterpoint. Reger isn't Bach, much as he tried to imitate him, and great as his counterpoint is, it occasionally needs a helping hand.
The Rieger-Sauer organ in Fulda Cathedral is an older and creakier machine than you'll usually find on organ recordings these days. It is also a huge instrument, and the registration list takes up two pages of the liner. It has some elegant colours, which are occasionally put to good use, but this music would be equally suited, perhaps better suited, to a smaller instrument. The organ has also caused the recording engineers some problems, and many of the registers seem strangely distant, as if they were hidden away at the very back of a huge organ case, with no possibility of getting a microphone close. There is little extraneous resonance from the church, which is a plus, but even so the organ sound lacks clarity.
Does Reger's organ music deserve better than this? Many would say that if you don't like the recording, the composer is much to blame as anybody. Even so, a little more precision and clarity would make all the difference with many of these short works. Most of this music is well conceived and expertly written, but it is going to take a recording with more impact than this one to win the composer many new converts.
Gavin Dixon