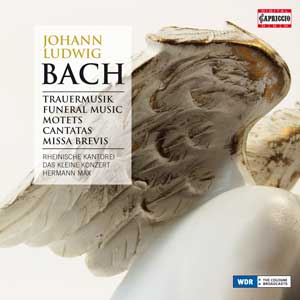 Johann Ludwig Bach, the so-called "Meiningen Bach" was a second cousin to J.S., who rated his older relative's works and performed many of them at the Thomaskirche. C.P.E. would later lament that his Thuringian ancestors had never sought audiences for their work outside of their small provincial towns, which may explain why so few of their works have survived.
On the strength of these works, Johann Ludwig was clearly a major talent. Parallels with Johann Sebastian are everywhere, from the subtle orchestration to the varied use of liturgical genres and styles. The musical discourse is slightly more straightforward, there isn't the same fluidity of counterpoint, nor the subtly of harmony. Even so, you wouldn’t mistake anything here for Buxtehude or Pachelbel, it is all more sophisticated than that.
The three discs give us a varied range of liturgical styles. The first is given over to the Funeral Music for Duke Ernst Ludwig, a varied and surprisingly upbeat service. The second is devoted to a series of motets, which closely mirror, or rather pre-empt, those of J.S. The third disc begins with a mass setting on "Allein Gott in der Hoh sei Her", a curiously Lutheran concoction, despite the Latin words. If anything, the mass sounds like a cantata, so the fact that it is followed by three cantatas seems all the more appropriate.
The performances are good, and really work to the benefit of the music. Johann Ludwig doesn't write taxing solo parts in the way that J.S. later would, nor does he give us independent wind obbligatos, preferring to use the orchestral forces to introduce and double the singers. That is not to say the the orchestration is uninteresting, but it does mean that few of the vocal or wind soloists get a chance to shine. One exception is soprano Maria Zadory, who has a few showy arias on the cantata disc. She uses more vibrato than I'd normally associate with baroque repertoire, but it never seems excessive.
The recordings were made in 1993/4, suggesting that this may be a reissue, although no clue is given in the liner. The sound quality is good, although the choir can sometimes sound a little distant. Given the generally homophonic nature of this music, both the performance and the sound engineering needs slightly different aims to those of a recording of Johann Sebastian. So things are more rounded here, with less attention to the minute details. When there is counterpoint in the choir or orchestra, and there occasionally is, you have to listen out for it a bit more, but that is no great hardship.
All round, an interesting and enjoyable set. I'd previously been sceptical of the quality of the music by Bach's ancestors, but it turns out some are more interesting than others. If, like me, you have ever got bogged down in the turgid strains of Johann Christoph Bach, rest assured that this music is much more interesting and varied. Not quite up to the standards of Johann Sebastian, of course, but the family resemblance is unmistakable.
Gavin Dixon