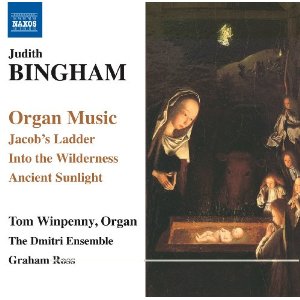 The old adage that all music has its roots in singing is clearly demonstrated in the work of Judith Bingham. She has a background in choral singing herself, and choral composition is a central part of her catalogue. But her instrumental works also have close links with the human voice, as this organ music demonstrates. Many of the works seek meditative stillness through quiet held chords, but even here a rigorous structure of voice leading keeps the music flowing and coherent. And the suggested registrations err towards the open diapason sounds, all the better to bring out the inherent vocal qualities of the organ's character.
That said, the stand-out work on this disc, the mini-concerto Jacob's Ladder that opens the programme, explores instead the timbral relationships between the organ and a small string ensemble. But the approach is more to bring the strings close to the organ than visa versa. Double bass harmonics mingle with the higher partials of some of the organ registers to created subtle blends of sound. Pizzicatos are used to add attack in places, but there is never any sense of competition between the soloist and ensemble.
All the other works on the disc are for solo organ. The liturgical basis of most of the music is evident, not least from the very direct relationships between the religious titles and the sound-worlds that each piece evokes. Most of the music is relatively quiet, but there is plenty of variety here. Bingham often uses repeated note accompaniments to move the music along, a logical but distinctive device.
The liner tells us that Bingham's main inspirations for organ writing have come from France: Couperin, de Grigny, Widor and Alain. The latter is particularly evident in many of these meditations, but Bingham never indulges in the more perfumed Catholic indulgences that characterise so much French organ writing of the 20th century. One name that is notable by its absence on the list of influences is Messiaen, and it is refreshing to hear recent organ music that manages to escape his overbearing influence.
Tom Winpenny is a sympathetic and imaginative interpreter. As Assistant Master of the Music at St Albans Cathedral, he knows its organ as well as anybody. He chooses his registrations well, presenting an impressive array of colours, despite the restraint required in playing generally quiet music on a huge organ. And the organ itself is in fine voice, this one of the first recordings to have been made on it since the comprehensive renovation work in 2009.
Naxos have done another great service here to the cause of contemporary organ music. Their usual combination of no-nonsense packaging but with detailed commentary is as welcome as ever. Many of the works take inspiration from the visual arts, and it is a shame that none of the paintings on which individual pieces are based have not been reproduced in the liner. That's not Naxos' way, of course, but if there was any reason to consider taking the project to a different company, this might be it.
Gavin Dixon