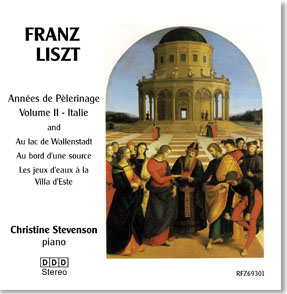 Considering this year is the 200th anniversary of Liszt's birth, there have been surprisingly few recordings of his music appearing. Of course, most of his piano works have long and venerable history on disc, but interpretation is such a key element with Liszt that any interesting new recording is worth seeking out.
That is certainly the case with Christine Stevenson's new recording of the second year of the Annees de Pelerinage. Unlike many of her predecessors, she is not one to go to extremes to ensure that her readings stand out. Instead, she distinguishes herself though attention to the details and through an insightful approach to dramatic structure. When you first hear Sposalizio, you may think that the interpretation sounds ponderous and even pedantic. But a little patience reveals that Stevenson is building up both the emotion and the dynamics. This is an excellent approach with the Deuxieme Annee, as the set starts off in a relatively cool mood and then gradually builds up to the monumental Dante Sonata that forms its conclusion. Liszt's innovative forms are usually open to criticisms of poor structuring, but Stevenson demonstrates that if his works are performed with a keen sense of the dramatic scope, both of each movement and of the album as a whole, his work can make perfect structural sense.
Even so, if you are looking for real fireworks, this might not be the interpretation for you. Even in the Dante Sonata, dramatic as the performance is, there is rarely the sense of sheer danger you feel with some pianists. But to my ear, the attention to detail more than makes up for this. Curiously, the middle register of the piano sounds slightly muddy, while the upper and lower ends are always perfectly clear. However, all the details remain as clear as you could want. Stevenson's restrained pedalling ensures that an ideal balance is achieved between the clarity of the individual notes and the line of the phrase.
With the notable exception of the Transcendental Studies, very few of Liszt's piano albums fill a CD, making appropriate choices of filler a perpetual headache for pianists and record labels. Stevenson opts for a few selections from the first and third years: Au lac de Wallenstadt, Au bord d'une source and Les jeux d'eaux a la Villa d'Este. These too are clearly articulated and well structured. They do seem like afterthoughts though, especially after the imposing Dante Sonata that precedes them.
Presentation wise, this disc scores very highly. Raphael's Sposalizio makes appearances on the cover and on the disc itself, and there is also an elegant portrait of Liszt from Henri Lehmann inside. And with the exception of those minor problems with the piano's middle register, the recorded sound is very good indeed. I hear that Potton Hall is up for sale, although I may be a little behind with that story. Whichever way, the clear but radiant sound that the hall imparts to the piano here demonstrates exactly why the venue is worth saving.
Gavin Dixon