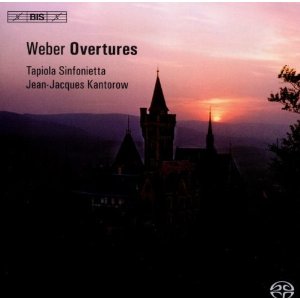 
Carl Maria von Weber's orchestral overtures make for a mixed but enjoyable programme. They don't all have operas associated, but even the ones that do date from a period when an overture was expected to stand on its own musical merits. The most famous of them, Freischutz, Oberon and Euryanthe, need no introduction, and most of the others are in a similar vein. They are all light, but occasionally dramatic, well orchestrated and structured with enough panache to ensure none outstays its welcome.
Two of the overtures seem slightly distasteful, at least to my ear. The chinoiserie of Turandot, all pentatonic scales on flutes, is crass to say the least. Apparently Stravinsky rated this overture, but then he wasn't above cheap Orientalism himself, as his opera the Nightingale amply demonstrates. Then there is the appallingly jingoistic conclusion to the Jubel-Ouverture. If you don't know what is coming, I won't spoil the surprise, nasty as it is.
As it's name suggests, the Tapiola Sinfonietta is a chamber orchestra. It is probably about the size of orchestra that Weber himself would have known, although it is worth bearing in mind that this is not a period performance ensemble, and Kantorow locates the music firmly in the Romantic rather than the Classical tradition. That doesn't mean that he takes undue liberties with rubato, but he is not overly strict either. And he is happy for the orchestra to punch above its weight in the tuttis, which is great, especially as the players keep in firm control of their sound production even at the loudest dynamics. A few more desks of strings would have been nice, but the balance between the strings and wind never suffers.
The sound quality is excellent, even by the superior standards of BIS. The famed acoustics of the new Tapiola Hall must play a part in this clear but vibrant sound-scape. If the company didn't insist that their recordings are made without undue post-production jiggery-pokery, I'd have sworn that the bass had been artificially amplified. As it is, I'm happy to put the clarity of the trombones, lower horns and double basses down to the players and the acoustic. This solid bed of bass is what prevents the relatively small orchestra from ever sounding weedy.
This is an old fashioned disc in some ways. You don't often find collections of overtures in the catalogues any more. And Jean-Jaques Kantorow excels at the old fashioned musical values of drama, intensity and involvement. I have to confess that I can't hear the Freischutz Overture without thinking of Carlos Kleiber, and while Kantorow is aiming for a similar reading, it is no discredit to him that he doesn't quite manage it. In fact, the disc is an excellent combination of the old and the new – old fashioned musical values and up to the minute technology. An enjoyable disc, likely to be of great interest to Weber fans and to audiophiles.
Gavin Dixon