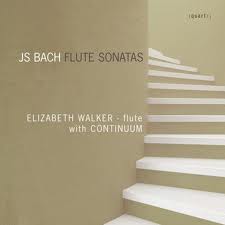 Bach's Flute Sonatas are a relative rarity on disc, but listening to this fine recording it is difficult to tell why. Elizabeth Walker and her colleagues present four sonatas, which is almost all of the composer's surviving and definitely attributed essays in the genre, and complement the set with an unaccompanied Partita BWV 1013.
We have a mixture of modern and period instruments here, but it never feels like a competition. The harpsichord is tuned to Vallotti temperament,which was apparently the temperament, or a temperament, used in Bach's time. It can be quite astringent in some keys, although it never grates. Liz Walker speculates in her liner note that Bach would have been well aware of the limitations of this temperament, and would have written his music accordingly. Whatever the answer, it certainly works, adding an interesting frisson to the whole project and never goes awry, even when we reach the distant key of G sharp minor.
The liner note goes on to discuss the flute design innovations of Johann Quantz, a contemporary of Bach. The suggestion that Bach knew of these is used as an implicit justification for the use of a modern instrument. The flute is of wood, but has a modern (Boehm I presume) key system and bore profile. Liz Walker explains that she has incorporated elements of baroque performance technique, and certainly the varied articulation links these performances directly with the work of period instrument performers. She also deliberately associates different dynamics with individual pitches to emulate the under- and over-blowing required of Baroque players to compensate for the tuning deficiencies of their instruments. Perhaps this is how she manages to stay in tune with the exotically tempered harpsichord. And whatever the rationale behind this recording, the intonation and ensemble are excellent throughout.
Cellist Christopher Poffley completes the continuo group. His performance is understated and very much accompaniment. But then, the generic status of these works is very difficult to pin down. Of the four sonatas, only the B minor BWV1030, the last on the disc, has a written out obbligato keyboard part. That makes it much closer to a trio sonata than the other three, which have strictly continuo accompaniments. I can imagine that the three players have had to do some experimenting to work out the balance and structure of their ensemble, with the result that the cellist has been pushed right to the back of the texture. It would have been nice if they'd given him a bit more room for dynamic variation and cadential ornaments though.
But the real star, of course, is the flute. Elizabeth Walker has a satisfyingly reedy tone on her wooden instrument. She could perhaps go even further in emulating the idiosyncrasies of early flutes in her playing. I don't know if it is a modern or a period performance tendency, but many of these movements sound surprisingly slow. That allows greater scope for enjoying the tone quality of the flute and the simple beauty of individual melodic lines, but sometimes the propulsion is lacking.
The sound quality is good. The balance favours the flute perhaps a little more than it actually needs, but the sense of presence the solo instrument is afforded is welcome. The recording was made in the church at Pilton, better known as the home of the Glastonbury Festival. It is a good acoustic, bright but not smothering.
All round a very enjoyable disc. Certainly one for the flute fans, and also for those of you who like your Bach historically-informed but without the pedantry of many period instrument players.
Gavin Dixon