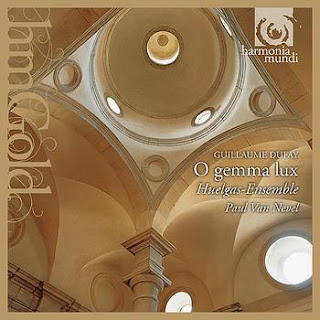 Here is yet another gem from the Harmonia Mundi back catalogue. Dufay's isorhythmic motets (presented complete here) are a high point, perhaps the high point, of late Gothic polyphony. The technique behind them is a bit complicated. It is based on short rhythmic cells superimposed onto longer pitch sequences. I'm not going to try to explain though, because the excellent liner notes do a much better job than I ever could, and anyway you don't need to understand the details to get the most out of the music.
That's because, although there is rigorous maths behind these works, they are highly expressive and varied. No doubt that is as much a product of the editing and performance as it is of the actual composition. But if, like me, you are willing to trust the scholarship, and indeed the musicianship, of Paul Van Nevel and the Huelgas-Ensemble, the awards are considerable. The expression and feeling of this music is not gained at the expense of its musical rigour. Certainly, the accompaniment and choir size changes, but there are few indulgences of rubato or portamento.
The acoustic of the Abbaye-aux-Dames, Saintes is warm and welcoming but without too much distortion. Dufay sets different words simultaneously in the separate lines, and these can get obscured by the acoustic. On the other hand, the singers do everything in their power to keep both words and music clear, and the result achieves a fine balance between precision and ambience.
Some interesting instruments are used on occasion, either doubling the singers or playing the tenor beneath them. Frustratingly, the liner doesn't tell us exactly which instruments these are, but early trombones certainly play an important part, and I'm sure I heard a rackett playing some fruity bass notes.
Dufay's isorhythmic motets have a reputation for mathematical rigour, but don't let that put you off this disc. The works are presented here as lively and approachable, but the clarity of the counterpoint is always retained, allowing the listener to marvel at the sheer complexity of it all. What is most amazing of all is the date, the last of the motets was written in 1442! If I didn't know better I'd have placed them at least 200 years later.
Gavin Dixon