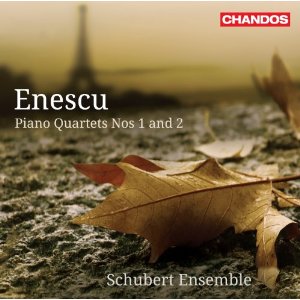 Two committed and passionate works get committed and passionate performances on this latest release from the Schubert Ensemble. Enescu's Piano Quartets make a natural pairing, the composer's distinctive musical personality links them, but the 35 years that separate their composition mean that each has a distinct individual identity. Martin Anderson points out in his liner note that this is only the third CD to pair the two works, and he is right to infer that the composer suffers serious neglect.
Like many emigre composers working in Paris in the first decades of the 20th century, Enescu developed a distinctive voice by combining elements of the folk music of his homeland with the cosmopolitan sophistication of the French capital. Ravel is clearly an important influence on both these works, with many of the movements indebted to his heady, swirling chamber music textures. The Romanian folk music element is less marked, but comes through in dance melodies and occasional modal-inflected harmonies. In truth, there isn't much here that is particularly "ethnographic", but just enough to separate Enescu's music from that of his Parisian mentors.
The First Quartet is the longer and the more involved, but it is also more coherent and tightly constructed than its successor. The first movement builds up over a 15 minute span, gradually increasing the textural density right up to an intense climax at the end, which while obviously intended to sound brutal and raw, is so close in style to Ravel that Parisian sophistication wins the day. Throughout this First Quartet, Enescu employs dense, unremitting textures, with lots of octave and unison doubling. That could pose a challenge to performers' ensemble skills, but the Schubert Ensemble execute every phrase with precision and clarity. The sheer density of much of this writing could bog the work down, but the players carefully shape and articulate each phrase, creating a sense of lightness, and often in spite of the composer's heavy chord voicings.
The Second Quartet is more rhapsodic, with less of that textural density, but less structural logic too. The challenge for the performers here is to find a way for the movements, and the work as a whole, to cohere. They manage by concentrating as much as possible on the melodies and the moments. By balancing the weight and emotional involvement of each of these phrases against each other, the work balances out. Enescu's use of the instruments is more varied and more interesting in this Second Quartet, and each player is given regular moments in the spotlight. The performance succeeds because each of the players is able to play their snatches of melody in a similarly passionate but disciplined style.
The balance of the ensemble is also impressive, and there are never any concerns about the relative weight of the piano and the other instruments. The recording gives the piano a round, warm sound, that mixes in well with the melodic lyricism of the string playing. Atmosphere is important in this music, so the resonant sound that the engineers derive from the Potton Hall acoustic is ideal.
Despite the advocacy of these excellent players, it seems unlikely that Enescu's Piano Quartets are going to find a wider audience any time soon. What stands against them more than anything else is their weight and continuous emotional involvement, which in the case of the First Quartet in particular can make the experience of listening a wearing one. But much of this music is very attractive, and given the continuing popularity of Ravel's similar chamber works, there may well be potential listeners out there who will take an interest. They will certainly be well served by this recording, which makes the most of what lightness there is in these scores. This is involved music, but the Schubert Ensemble ensure that every phrase of it is delivered with elegance and panache.
Gavin Dixon