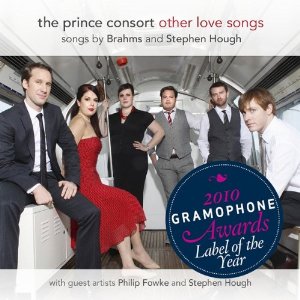 This album has already garnered some impressive plaudits in the press, and I'm happy to endorse most of what I have read about it. Brahms' two partsong sets Opp.52 and 65 are masterly examples of the form, making full use of all the colours and textures that the small vocal ensemble offers. But most of all, they are really fun. They are light and cheerful, but without ever sounding frivolous or trivial.
And the music certainly sounds fun when presented by the Prince Consort. Everything here is buoyant and propulsive, and the singers all share an understanding of Brahms' phrasing that helps the textures to cohere without masking the individuality of each of the performers. In fact, the relationship between individual and collective here is interesting. All of the performers, I'm sure, have busy musical careers away from this ensemble, and I have heard two of the singers take major operatic roles in the last twelve months, both putting in show-stopping performances (that's Jaques Imbrailo at Glyndebourne and Anna Leese at Holland Park). In the Brahms here, the vocal ensemble really sounds like a group of soloists, each with their own vocal characteristics. To be truthful, that makes the solo passages and duet sections more successful than the full ensemble songs, and there are a few occasions when the tutti sound could be a little more rounded and unified. But better that than the other way round, and the sheer musical interest that each of these accomplished singers brings to the mix makes up for the occasional roughness round the edges.
The choice of Stephen Hough as composer for the companion piece to the Brahms sets is a curious but ultimately successful one. Hough says that in the interest of variety he made a decision to avoid waltzes. In fact, he has taken the issue of variety a few steps further than that, and written a diverse collection of partsongs, which bear little relation to the Brahms, bar perhaps their genre and scale. "Other love songs", good as it is, is a bit of a mixed bag. The best of them are the comedy numbers, "Madam and her Madam" and "The Colour of Hair". Elsewhere, he does the plaintive, Britten-type thing in "Simon, Son of John" and the declamatory, Ned Rorem-type thing in "All Shall be Well". It is all good, clean fun, and only occasionally stretches the limits of the material's potential. Writing music to go up against Brahms is a tall order, and comparisons between the two composers are unlikely to put Hough's contribution in a favourable light. But it is to his credit then, that even when framed by Brahms' two great masterpieces of the genre, such comparisons don't suggest themselves, and the listener finds themselves appreciating Hough's little songs on their own considerable merits.
The piano playing on this disc is excellent. The group's accompanist, is joined by the composer for the Hough songs and by the equally venerable Philip Fowke for the Brahms. The ensemble between the pianists is absolutely spot-on, and the sensitivity of their accompaniments belies the number of hands and the keyboard. The sound quality is good, I'd say very good by CD standards and about average for SACD. All round, this is an attractive, fun and well executed album, not to mention an adventurous programme. What sort of works we can expect to hear on their next album is anybody's guess.
Gavin Dixon