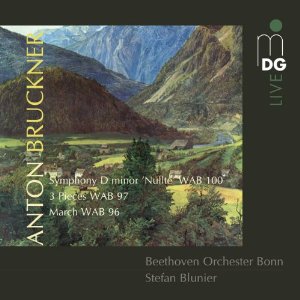 Bruckner's Symphony no.0 is a better work than its designation suggests. The composer was in a typically self-critical frame of mind when he decided to withdraw the symphony before it had ever been performed. Listening to this recording it seems he was being very harsh on himself. It is pure Bruckner, and everything that you'll find in the later symphonies, the opulent string writing, the floating woodwind obligatos, the brass chorales, are all here in one form or another. Of course, it is less sophisticated than any of Bruckner's mature works. The harmonic language is predictable and unimaginative, and the themes are short and often uninspired, in fact most of them are just scales.
But Bruckner devotees shouldn't be put off by any of that, because the sheer symphonic atmosphere of this piece is its salvation. That is clearly the way Stefan Blunier reads it anyway, and he gives us a reading which shows off all the finest qualities of the score, and without dwelling on its deficiencies. I always like recordings of Bruckner's early symphonies that treat them as equals to the composer's later works. Blunier does that, but this symphony require a few provisos. The fact that it is so much shorter than Bruckner's later symphonies, and that it doesn't have the same interest of detail, means that you can't make too much out of it. So Blunier gives us a relatively opulent reading, but never overindulges in rubato or extreme dynamics. The shorter spans of the individual movements allow the structure of each to come through clearly without any special efforts on the part of the conductor. Nevertheless, the whole work benefits from Blunier's careful pacing and precise balancing of each tutti against the last.
The Beethoven Orchester Bonn are, at least on the strength of this disc, ideal Bruckner interpreters. They are able to produce big, warm sounds that rarely seem unfocussed, and their sense of symphonic drama is always convincing, even when Bruckner uses fewer notes than you might expect to create his broad textures. The SACD sound also emphasises the overall picture over the details, which also works to the strengths of this score. Balance is good between the sections and the ambience of the hall is warm without being over-resonant.
While I'd recommend this disc to Bruckner fans, I don't think it is the best way into his music if you haven't heard his mature works. This is especially true of the very early March and Three Pieces that conclude the programme. Again they show the distinctive Bruckner sound in the process of emerging, and include some important pointers to the style of his later works, especially his use of various musical genres within the symphonies. But on their own merits they don't have a lot to commend them. They are proficiently composed and orchestrated I suppose, but uninspired. But many Bruckner enthusiasts out there probably think they own recordings of the every work the composer wrote, but have overlooked these. To them, this disc will be of special interest. The symphony should have broader appeal, and is certainly a satisfying listen. Just don't judge the composer on it if it is the only piece of his you've ever heard.