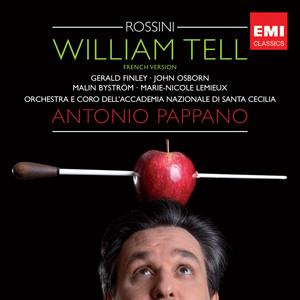 Buy from:
William Tell is always going to be a problematic work. There is plenty of drama in there, but the shape of each of the acts never quite makes musical sense. The characters seem well defined in isolation, but are all curiously similar when heard together. Most problematic of all is the overture, which is both unrelated to the opera proper, and which easily overshadows everything that follows it.
Antonio Pappano gives us a warts-and-all concert performance, with no real efforts to excuse or smooth over the score's many problems. Large, but apparently conventional, cuts are made to the third act, and while I don't know what I'm missing, what remains seems plenty long enough. But Pappano's genius with opera, and especially Italian opera, is to bring out the drama and the urgency in every bar, and that is exactly what he does here. The performance of the overture is exemplary, with lots of bass, lively percussion and wonderfully free woodwind solos. The quality of the music immediately drops when the singing begins, but the performance maintains the pace and continues the drama of the overture well into the first act. Pappano has assembled a fine cast, and Gerald Finley's many fans are not going to want to miss his rendition of the title role. He is more subdued than most of his colleagues, not quieter as such, but always singing with a round, intimate tone that endears every phrase. The other soloists are perhaps more stylistically suited to Rossini's overt vocal writing, but Finley's sophistication is a welcome contrast.
I've just been reading Richard Osborne's review of the recording in Gramophone, and it is clear that he likes it less than I do. I certainly agree with his point that the sound recording is not ideal, although most of the soloists come off all right. The choir sounds distant and generalised though, and the back of the orchestra sounds better than the front for some reason. But for all that, the general impression that the sound recording gives is of sharp-edged and crisp precision. When Pappano builds up one of Rossini's famous climaxes in the choir and orchestra, the audio is able to intensify everything, even though the details remain obscured.
Osborne's main criticism, and I certainly agree with this myself, is that the release is obviously a by-product of a live performance (or rather six), and the live situation causes more problems than it is worth. Not so long ago, a label like EMI could be relied upon to take projects like this and devote studio time at Abbey Road to getting them just right. Of course, the finances at EMI now mean that it is a miracle they are releasing any CDs at all, so perhaps we should think ourselves lucky. The liner demonstrates the dichotomy. We are given the full libretto in French and English, something only a major label would do. But the rest of the liner is pretty inconsequential, and light-heated in a way that really jars. There is even a picture of the Lone Ranger on the inside of the back cover – there's no need for that, surely?