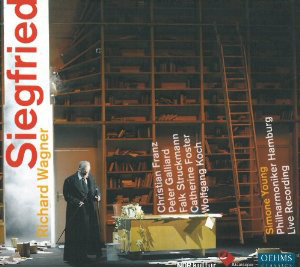 Dieter Oehms clearly knows that he is onto a good thing with Ring cycles from German opera houses. Both Hamburg and Frankfurt have cycles coming out on the Oehms label, not to mention a recent Tristan from Vienna, and a Wagner highlights disc from Bratislava. Wagner sells, or rather the idea of respectable performers recording Wagner for a label known for its high audio standards sells. My understanding though, is that most if not all of these productions are recorded in-house then sold as more or less a finished product to the label, so audio standards are unlikely to be uniformly high.
I mention all this because I have recently been reviewing the Rheingold from Frankfurt on the same label, and while both are good, this Hamburg Siegfried doesn't quite come up to the standards set in Frankfurt, either technically or artistically. This is probably an unfair comparison though, because the Rheingold is one of the best Wagner recordings I have heard in recent years. And this Siegfried certainly has its merits. The cast is good, the orchestra is precise and clear, and the interpretation is coherent and symphonic.
Simone Young is clearly on top of this score. She keeps impeccable balance in the orchestra, seems to communicate well with the singers on the stage, and finds some real drama for the more turbulent sections. I'm not completely convinced though by her interpretation. The music making often seems very safe and the tempos often feel rigid. Wagner always requires a balance between dramatic urgency and motivic clarity, but Young almost always errs in favour of the latter.
The cast is good, and the dramatic characterisations from many of the singers compensate for the lack of excitement from the pit. It is a score dominated by bass and baritone roles, and all are impressively sinister. Wolfgang Galliard as Mime and Wolfgang Koch as Alberich are each a menacing presence in their own right. Fortunately, they are easy to tell apart as well, making it possible to work out what is going on in the third scene of Act 2. Galliard has a tendency to slide around between the notes, which can get annoying, although contributes well to characterisation. Diogenes Randes is another appropriately sinister presence in the role of Fafner. He doesn't quite have the weight on those low, low notes, but otherwise is the ideal singer for the job. Ha Young Lee sings the woodbird with lots of vibrato, which could sound crass in other contexts, but gives this role valuable colour. Falk Struckmann, probably the most famous Wagnerian in the cast, is his usual dependable self as the Wanderer. He is somebody we are hearing a good deal of on disc these days, and with good reason – I'm looking forward to his Amfortas from Amsterdam.
After two acts of good but unexceptional Wagner, this performance finally takes off in the third. Deborah Humble is an authoritative Erda, but even better is the interaction between Siegfried and Brunnhilde that makes up the last half hour or so. Christian Franz is a complex Siegfried. He has all the power, not to mention the stamina, he needs for the many challenges of the role, but he is at his best in the tender and quiet moments. In these, he often drains the voice of all colour to approach a speaking tone, giving welcome respite from the musical saturation of Wagner's score. Catherine Foster is a British Wagnerian soprano and she is very impressive indeed. The success of this third act rests largely on the dramatic and vocal heft of Brunnhilde, and Foster has both. Everything really comes together in this last scene, with Franz and Watson providing the drama, while Simone Young and the orchestra support the action, always keeping an eye on the details, and never letting the balance go awry.
The sound quality is good, but again not up to the standards achieved at Frankfurt. The singers don't seem to be as close to the microphones, and often when they are upstage they can sound very distant indeed. The recorded sound of the orchestra also lacks immediacy. Fortunately, the clarity of the orchestral sound doesn't suffer, with each of the sections clearly distinguishable and with impressively relayed bass, especially from the lower brass and bass clarinet.
From the production stills in the liner (which includes full libretto and translation), it is clear that this is one of those German regietheater-type Ring productions that usually get a bad press when they arrive here on DVD. CD listeners need not worry too much about that though. Apart from the distance from the singers to the microphones, the staging has little noticeable impact on the sound recording, with virtually no stage noise or audience interruptions. A serviceable Siegfried then, but not an exceptional one. There are no weak links in the cast, the orchestra plays well, and the recorded sound is up to the standards you'd expect from a German house. But nothing really excels, and there are certainly more competitive recordings on the market.