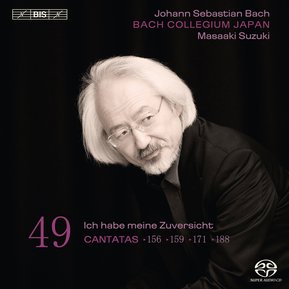 Masaaki Suzuki writes that "The history of transmission of [Cantata BWV188] can only be described as highly unfortunate." That's the understatement of the century. The first movement of the work, a glorious organ solo, became detached from the manuscript at an early stage. The rest of it remained in one piece until some point in the 19th century, when it was cut into strips and distributed as relic-like souvenirs.
Fortunately, it has proved easier to reconstruct than many of Bach's missing cantatas. And all the works on this disc are from 1727-8 a period of extraordinary cantata loss. It is thought that Bach wrote a cantata for every Sunday over that year, each to a Picander text, but only a handful survive, and many of those only in fragmentary form. Suzuki, to his eternal credit, looks on the bright side of this situation, saying that he looks forward to lost cantatas resurfacing as they surely will at some point in the future.
When that happens, he will no doubt have to pick up where he left off with his cantata cycle, now nearing its end. It is proving to be one of the best cycles, and possibly the best cycle to have been put down. It is certainly the most consistent in terms of style and quality, and if you know any of the previous instalments, you'll know what to expect here.
The four cantatas BWV156, 159, 171 and 188 have just the right balance of stylistic consistency and variety between them to make for a satisfying album. The first two, Ich habe meine Zuvershicht and Ich steh einem Fuss im Grabe, both open with a concertante instrumental movement, for organ and oboe respectively. And both those solo instruments remain as an obbligato presence throughout each of their respective cantatas. I'm guessing that organist Masato Suzuki is Masaaki's son (frustratingly he doesn't get a bio in the liner). He is certainly a musician in the same spirit and of the same skill as the conductor. Like everything on this disc, the organ playing sounds free and vital, yet the registration choices are restrained and the rubato is kept to an absolute minimum. It is great to finally hear the organ of the Kobe Shoin Women's University Chapel. The organ, which sits atop a rood screen, has been pictured in every volume of the cycle to date, but this is the first one I have heard it in. It has a satisfyingly rustic, early German sound, but is of course in tip-top condition with excellent internal balance and a beautifully sympathetic relationship with the chapel's acoustic. Masamitsu San'nomiya is the oboe soloist in BWV156. This too is a masterful performance, again freely expressive and warm, but without any ostentatious ornamentation and hardly any rubato.
Another feature linking two cantatas on the disc (BWV 156 and 159) is the device of an aria based on a chorale, where the freely inventive solo line is given to a lower voice, and the choral theme is sung in unison by the sopranos of the choir. Perhaps it was Suzuki's idea to contrast the solo line with the unison voices for the chorale. If so, it is a stroke of genius, a beguiling mash-up of the two genres. Both movements are taken surprisingly slowly, and I'd imagine that many or most in the period performance movement would consider this an indulgence too far. But Suzuki knows when to base his work on scholarship and when to follow his musical instinct, and his instinct rarely fails him.
Presumably Suzuki's musical instincts are given free reign these days when it comes to choosing vocal soloists. The four here, Rachel Nichols, Robin Blaze, Gerd Turk and Peter Kooij, all seem like old friends, and have made numerous appearances in previous instalments. All are on top form and do Suzuki proud. Nichols only has one aria and one recitative this time round, but makes up for the lack of quantity with quality of the highest order. Blaze and Turk have the bulk of the solo work. Both have a few minor intonation problems, Blaze at the top of his register, Turk at the bottom, but nothing to worry about. Kooij has seemed past his best on recent instalments, but Suzuki has kept faith with him, and it has paid off handsomely here. His tone is warm and elegant, and never strains at either end of the register.
Another instant classic then from Masaaki Suzuki and his Japanese forces. There can only be a few more releases to go before this cycle is complete. (The Harnoncourt/Leonhardt cycle ran to 60 discs, but I'm sure that with today's technology and some forward planning, BIS will bring it in on a few less.) I'll miss these new releases when they do finally stop appearing, especially if, as seems likely, the remaining discs are up to these impressive standards.