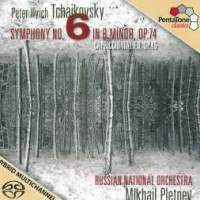 Tchaikovsky fans will no doubt already have shelves bulging with superlative 6th Symphony recordings, but they should do their best to make space for Pletnev's latest, which is as good as any. It is in fact the third time he and his Russian forces have visited this score. Their knowledge of it pays dividends, and there is never any sense that over-familiarity is breeding contempt or boredom.
Every phrase sounds like you are hearing it for the first time. There is nothing particularly radical about the reading, but the freshness and energy of the orchestral playing endear every phrase. And Pletnev achieves an impressive balance between the suave elegance of the dance passages in the first two movements and the sinister moods later on. The opening too is fabulous, with real atmosphere and dark foreboding.
The Polyhymnia team make a great job of the sound recording. They too manage to square a circle by giving us both absolute clarity to all the orchestral textures and a seductive sense of atmosphere. SACD audio usually manages one or other, but rarely are we afforded both. I particularly like the bass in the mix, which is clean and penetrating, but never exaggerated. So the double basses balance well with the rest of the strings, but when the bass drum is required to cut through, it does just that.
Excellent playing from every section of the orchestra. The strings play with precise ensemble, but also manage an impressive array of colours and moods. The woodwinds each bring a strong sense of individuality to their solos, enriching the corporate identity of the orchestra rather than compromising it. The brass are powerful when needed, but always have an elegant tone, and come into their own in the pianissimos, especially the trombones. The ending of the first movement is particular treat, with the trombone section matching the elegance of the strings that precede them, and bringing it to a conclusion with all the grace and precision you could want.
I'm at a loss to understand why anybody could every want to listen to the Capriccio Italien more than once. It is surely one of the most trivial orchestral works ever composed. And tacking it onto the end of the sublime 6th Symphony only emphasises its insignificance. Even so, the performance here is very good, and if nothing else, the work acts as a showcase for Pletnev's impressive orchestra. Pretty much every section gets a moment in the spotlight, and all play to an equally high standard.
The recording was made in Moscow in June 2010 (a studio rather than a live recording, which is all too rare these days). Only a few weeks later Pletnev found himself under arrest in Thailand. The charges were later dropped, but not before the whole affair had forced him to cancel appearances at the Proms and the Edinburgh Festival. Tchaikovsky had been on the planned programme for both events. Listening to this recordings gives an idea of what those audiences last summer missed.