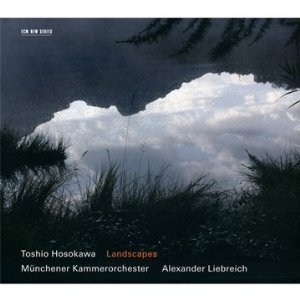 Programming a whole disc of music by Toshio Hosokawa must be a tricky job, as the similarities between his works seriously outweigh the differences. The result here is a typical ECM ambient/world/contemporary classical mix, rarely reaching above the mezzo forte, and with no disconcerting changes of pace or mood.
The focal point for all four of these works (even the one in which it does not appear) is the shō. This mouth organ type instrument has become a favourite with Japanese composers of 'Western' classical' music, at least since Takemitsu's Ceremonial in the early 90s. In some senses, its presence is very restrictive, it is very quiet and in cannot play fast. But its soundworld is unique, all airy wispy chords subtly blending into each other to create a continuum of sound.
Hosokawa, like Takemitsu and others before him, explores how an orchestral string section can complement this esoteric soloist. His solution is to write string music that breathes with the shō. Chords, often of inscrutably complex construction, emerge from nothing and then swell into the foreground, before receding back to silence. The sensitivity of this approach is laudable, but the variety within it is at a microscopic level. The frustration for the listener, or for this Western listener at least, is that the music seems essentially ambient, yet you can't just let it flow over you. To pick out those tiny changes and developments you must listen hard, but there just aren't enough notes to justify that level of concentration.
Nevertheless, there is variety here. The first work, Landscape V, is an arrangement for shō and string orchestra of a work originally written with string quartet accompaniment. Then comes Ceremonial Dance, also for string orchestra, although this time without shō. Even so its presence is felt throughout, and this is a work very much in the same spirit, ambient and intellectual in equal measure. The last work on the disc, Cloud and Light, ambitiously couples the shō soloist with a full orchestra. The variety of colours offered by the wind and percussion is very welcome, and there is also a greater variety of pace, with the louder sections nudging the speed up just a little. But the phrasing here is still based in the in-and-out breathing of the shō soloist, so the music is essentially just a small progression on from the string writing in Landscape V.
The most impressive piece on the disc is the third track, Saukua für Otto Tomek. This is a work for shō solo, without the trappings of a string section or orchestra accompaniment. The music has its roots in a Japanese folk song, although the lineage is complicated. Hosokawa made a choral arrangement of the song, which he prefixed with this shō solo. The resulting work seems too abstract and ambient to actually be a song setting, but the range of sonorities he draws from the instrument is magnificent. Writing for the shō must be a specialist skill, requiring a deep knowledge of the instrument's mechanics and history. Coupling it with Western instruments is harder still, and the other works on this disc show that the results are inevitably going to be hit and miss. But in this solo work, he manages to combine advanced harmonies and elegant atmospheric writing with the instrument's distinctive musical identity. In comparison, the orchestral writing in the other works, competent as it often is, just seems like a distraction.