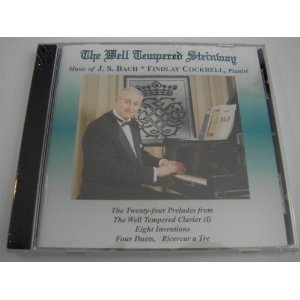 Findlay Cockrell offers familiar favourites but with a twist on this fascinating Bach recording. He is one of many Bach interpreters to mix the modern with the historically informed, but his configuration of those two poles is probably unique. The piano he plays is a modernish (1916) Steinway concert grand. There is plenty of debate about what sort of keyboard instruments Bach would have known, but he certainly would not have been familiar with anything like this.
However, Cockrell opts for so-called 'well temperament' in the tuning of the instrument. The history of keyboard tuning is a long and convoluted one, usually best left to the specialists, but is of relevance here. Bach's aim in writing the Well Tempered Clavier was to demonstrate the flexibility of the new tuning system, which for the first time allowed music to be performed in every major and minor key. But this has led to a misunderstanding that the tuning system he was using was exactly the same as the equal temperament of today. It wasn't, it was a little less equal and favoured the key signatures with more white notes than those with more black notes. Cockrell uses the temperament that Bach's instrument (which was probably a harpsichord) was tuned to.
This gives the sequence an interesting narrative, but in a sense it is the reverse of what Bach had in mind. The composer starts out in C major, on just the white notes, then gradually moves towards the predominantly black notes keys. For Bach, this was a progression into more and more daring territory, and perhaps it is for Cockrell too. For modern listeners the effect is to move further and further from familiar tunings: the C major prelude sounds as you'd expect, but by the time we get to the B major, things are starting to get strange.
That said, the differences are subtle. Certainly each of the preludes has a more distinct identity as a result of the temperament, but the deviation in tuning from today's norms really is quite small. It is most apparent in keys that have a black note in the tonic chord. Approaching the final cadence, you expect the last chord to resolve the apparent dissonances that have been set up, but when it arrives, it is just as dissonant, leaving an uneasy lack of resolution.
Aware that the tuning may be unsettling for his listeners, Cockrell makes sure that every other aspect of the recording is familiar. His interpretations are lively, and they're often fast, but he has a very clear touch, and a very clean approach to phrasing and articulation. Ornamentation is kept to a minimum, as is rubato. On the other hand, there are plenty of dynamic swells and contrasts to impart drama and structure to the individual works.
The relationship with the Steinway company clearly goes further than the pun in the album title. On the cover, Cockrell is pictured sitting in front of a framed image of the company's logo, and the same logo also appears on the back. It is surprising then that the instrument used is almost 100 years old. It has a rounder, more friendly sound that a modern grand. In fact, it is in excellent condition and sounds beautiful, a great advocate for Steinway craftsmanship.
Cockrell only gives us the preludes, not the fugues, and only from the first of the two books. That accelerates his progress into the unknown territory of well temperament, but does mean that it is over quicker. As compensation, he continues with some of the Two Part Inventions, the Four Duets and the opening Ricercar of The Musical Offering, bringing the running time up to a respectable 70 minutes. These extras are all well played, and are certainly welcome. After the effort, pleasurable as it is, to attune the ear to the temperament, it is good to stay in the zone for as long as possible, so well tempered Inventions and Duets seem like an excellent way to round the programme off.