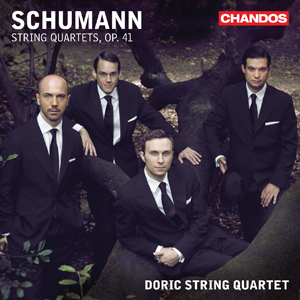 Buy from:
After a very impressive disc of Walton, the Doric Quartet have now moved into the core repertoire, with an equally assured reading of Schumann's Op.41 set. Everything comes together on this disc. The ensemble of the quartet is beyond reproach, the sensitivity of the playing makes every phrase seductive, and the quality of the audio recording is up to the high standards that we have come to expect from Chandos.
Given the number of recordings that already exist of these works, it is to the Doric Quartet's credit that they are able to do something new and individual with them. Attention to detail is the basis of their approach. They are also careful to keep an eye on the bigger picture, although the structure of these works is fairly conventional, so there isn't much new to say about the way that they progress and cohere. And the details, which are picked out as much by the high quality audio as by the playing, are presented as ingredients in the emotive structure of the works. Schumann has a natural gift for scoring for string quartet, but the interplay between the individual instruments is always put to resolutely expressive purposes. The stereo array of the recording really separates out the players, and it is as if the listener is sitting in among them. That makes the bouncing around of musical ideas within the ensemble all the more fascinating.
The atmosphere of each of the movements is beautifully rendered. Quartet no.1, by the far the finest of the three, is made all the more symphonic through the contrast between the serene third movement and the energised fourth. And again in this finale, indeed all three finales, the energy of the music seems all the more vital for being passed around the players to the left and right of the listener. The audio quality is so good that you can hear which of the players is leading the ensemble at any given point, and Schumann's regular inversion of the textures to give the viola or cello the melody means that the music is not always led from the top.
The quartet's adherence to Schumann's tempo and dynamic markings is laudable, although some might feel it tends towards pedantry. This is mainly an issue in outer movements, where Schumann often sets up a catchy, propulsive rhythm, but then opposes that momentum with rubato markings or sudden dynamic contrasts. It is a tricky circle for any players to square, and the Doric Quartet are, I think, right to present the dichotomy to their listeners rather than just pushing through.
To me, this is close to ideal Schumann interpretation, and it augers well for the future recording career of the Doric Quartet, especially as Chandos now seem confident to let them loose on the core repertoire. I just wonder if they are going to get labelled as 'intellectual' players, in the way that Brendel was. Again, whatever is said about Brendel's 'thoughtful' interpretations, I really struggle to see that as a problem. In fact I think it is the very quality that distinguished him from most other pianists of his generation. But many others disagree, and they are probably the listeners who are going to have problems with this considered and elegant Schumann disc. The answer, I suspect, is to head straight for the repertoire in which profoundly thoughtful interpretation is an undisputed virtue – the late Beethoven quartets. The Dorics will have to get round to them one day, and as far as I'm concerned the sooner the better.