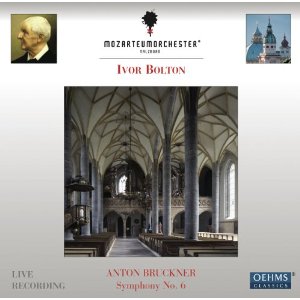 Ivor Bolton's approach doesn't suit every Bruckner symphony, but he has some valuable and rare insights to offer on the Sixth. Previous instalments in this cycle have lacked weight and dramatic integrity. This Sixth is clearly in the same mould, but the benefits outweigh the losses, especially in the details he brings out from the score, which dozens of conductors before him have either overlooked or sacrificed for the unity of the whole.
The Mozarteumorchester Salzburg lives up its their name. If it weren't for the photograph of what is clearly a full size orchestra in the liner, I would have sworn that this was a chamber ensemble, albeit a large-ish one. The strings in particular seem to be lacking a few desks in each section. But if that is an illusion, it is a result of the chamber-like playing from the strings. They never go for big full-bow sounds, opting instead for clear and precise textures, and creating contrast though variety of articulation rather than extreme dynamic contrasts. And the Austrian character of the string playing is evident throughout, especially in the earthy, rustic sounds of the slow movement and scherzo.
The woodwind and brass follow suit. There is some wonderfully distinctive playing from the woodwind soloists, especially the oboe, who is heavy on the vibrato, but not to a fault. And the brass playing is just excellent. Bolton never asks them to go overboard on the climaxes, enabling them to maintain a fine tone throughout. The ensemble within the trumpet and horn sections is ideal. And as with the strings, the range of articulations, especially from the horn and trumpet soloists is a revelation.
The more modest dynamics from the strings allow a good number of wind counterpoints to come through that you may never have heard before. Bolton makes a point of faithfully reproducing all the articulations in the score. That often means that phases are shaped more through the variety of attack on the various notes than through dynamics or rubato. The rubato is perhaps a little too literal; tempo changes are given as specified in the score, but rubato for phrasing is much more subtle.
Bolton compensates for the lack of weight in the orchestra's sound with some expansive tempos, especially in the first two movements. That is a risky strategy but it pays off, returning a sense of grandeur to the music. And he is not afraid to drive the finale on when required. The last five minutes succeed primarily because of the increase in tempo and energy he injects.
But for all that, the lack of weight in the orchestral sound remains a problem. There are a number of places were the music comes to a halt and after the brief caesura the full string section enters with a large, warm chord. Bolton tries to make the coming entry more spectacular by drawing out the pause, but the thin sound from the strings, when it comes, is usually a disappointment.
Otherwise this is an excellent recording. The focus on detail really justifies many of Bruckner's compositional decisions. More grandiose recordings make the work out to be more like the monumental Eighth or Ninth. It is always going to suffer by comparison to them, so in many ways Bolton's approach – to treat the often delicate textures with more care and attention – better represents its more modest aspirations.