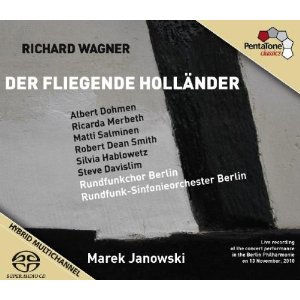 Marek Janowski's Wagner cycle on PentaTone gets off to an excellent start with this Flying Dutchman. All ten of Wagner's mature operas and musicdramas will be appearing between now and 2013, the composer's bicentenary, and if they're all as good as this, it promises to be an exceptional recording project.
Janowski has said that he now conducts Wagner exclusively in the concert hall, having abandoned staged opera in protest at the excesses of his erstwhile regietheater colleagues. His view that Wagner's vision for his music can be preserved through concert performance is endorsed in the liner (or rather hardback book format packaging) by no less a figure than Norman Larmmert, president of the Bundestag. He even goes as far as to say that Wagner would have approved.
I'm sceptical of that. Extracting the music from the other dimensions of a staged production is hardly in the spirit of gesamtkunstwerk. Nevertheless, it is increasingly becoming the norm in the record industry, and this Dutchman is just the latest in a string of Wagner operas on CD/SACD taken from live concert performances. In general the quality bears out the approach. Elder's continuing Ring cycle with the Halle, and the two recent Parsifals from Gergiev and Zweden have demonstrated that a good live concert performance can be an ideal subject for a high quality recording, and this PentaTone release is at least to the standard of any of those.
Part of Janowski's justification seems to be that the music itself contains enough of the drama to compensate for the lack of staging. He practises what he preaches, and delivers a wonderfully dramatic reading. But that is only one of the many qualities of this performance, and the drama is always matched and balanced by control of the textures and immaculate preparation. The main difference between this reading and most of its competitors on the market is that Janowski never lets the music, and the storm music in particular, overwhelm. There is always detail and balance to the sound, and the separate sections of the orchestra are always clearly defined.
The sheer quality of the SACD audio is enough to recommend the release. The recording team do, of course, have the benefit of the excellent acoustic at the Philharmonie in Berlin. Not only is this clear and vibrant, but it is also impressively unobtrusive. van Zwedens Parsifal, in comparison, excellent as the audio is there, is obviously a concert performance because of the distinctively resonant acoustic of the Concertgebouw. The Philharmonie, in contrast, could pass for a good opera house acoustic, adding credibility to the results.
The casting is excellent, and most of the names are familiar from Wagner performances at the world's top house, so probably don't need much introduction. Matti Salminen is the Daland of today, and gives a reading that has both weight and humanity. Albert Dohmen is similarly weighty, but more ethereal and emotionally distant. This has the valuable effect of distinguishing the two low voices in their various scenes together. Ricarda Merbeth puts on quite a lot of vibrato as Senta, but it is always carefully controlled and works to the benefit of her tone. She has a valuable alto-like richness to her lower register that Wagner occasionally employs. Robert Dean Smith, although rapidly becoming the Heldentenor of his generation, gives a more bel canto performance as Erik. His tone is surprisingly light and floating, which contrasts well with the predominantly heavier voices in the rest of the cast. The only slightly weak link is Steve Davislim as the Steuermann. His is the only voice that risks being subsumed by the orchestra, and his tone is occasionally unstable. But the recording team ensure that he is always at the front of the sound, so nothing is lost.
The delicacy and detail of much of this music-making is the greatest surprise on this recording. Janowski locates the music decisively in the early 1840s, and makes all those connections with Weber explicit, especially the often delicate woodwind writing and the brass interjections, which are effective because of their rarity and brevity rather than their sheer force. But there are plenty of recordings out there that demonstrate that this orchestra can do force as well. In fact, the impressive track record of everybody involved here, the orchestra, choir, soloists, conductor and label, mean that the artistic success of this release should come as no surprise. It also means that future releases in the cycle are more or less guaranteed to be among the best of the many offerings in Wagner's anniversary year.