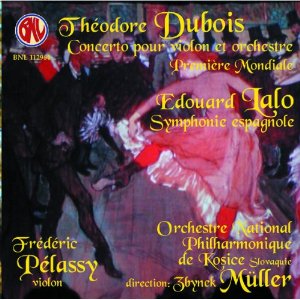 Buy from:
Dubois' Concerto and Lalo's Symphony make an excellent pairing. Despite the greater fame the latter has achieved, the two works are of almost equal stature and are aesthetically very similar. Both are richly melodic, yet neither has tunes that are so memorable as to dominate the listening experience. And the balance of orchestra and soloist in the two works makes one almost the mirror image of the other, Dubois relegating the orchestra to a decidedly subservient position, while Lalo entitles his work a symphony, demonstrating that the ensemble is at least the equal of the soloist.
Théodore Dubois' seems to have achieved too much in his lifetime for his posthumous reputation ever to catch up. He was a recipient of the Prix de Rome, organist at the Church of the Madeleine, director of the Paris Conservatoire and a member of the Institut de France. In an age that valued composers who were outsiders over those of the establishment, his official standing weighed against his many compositions, which continue to bear the brunt of his rival's petty jealousies. If this Violin Concerto is anything to go by, then modern audiences have been missing out on a great deal. The Concerto is traditionally structured, as may befit the work of an 'academic' composer, but the music it contains is anything but staid or conventional. Every corner of the violin's timbre and range are exploited, and the soloist is given a string of endlessly inventive melodies, which are supported by sumptuous and ever-changing textures from the orchestra. Most listeners are likely to come to this disc for the Lalo, but I suspect that most will enjoy the Dubois just as much.
Frédéric Pelassy brings an ideally Gallic sensibility to both works. His tone is assertive, an important quality in both works, but always elegant. He is able to make the solo lines float while also giving a strong sense of rhythm through his definite articulations and controlled rubato. He has a fabulous viola-like richness to his lower register, which both composers exploit, and a focussed, precise sound in the upper reaches.
The Slovak State Philharmonic Kosice are competent accompanists, although the orchestra rarely shines the way that Lalo in particular expects. Conductor Zbyněk Müller is more interested in precision than excitement, and so some of the orchestra's climaxes in the symphony don't quite reach the tumult you'll find on other recordings. But, barring a few ensemble problems between the woodwind soloists and the violin, the accuracy is commendable, and the balance between the orchestra and soloist, a tricky issue in both works, is finely judged.
The sound quality does the soloist more favours than the orchestra. The violin always sounds immediate and clear, but the orchestral sound is more generalised and distant. It's not a big problem though, and even though Lalo calls his work a symphony, the soloist commands the listener's attention throughout both works.
An interesting release then, and one that will hopefully introduce many new listeners to the work of Théodore Dubois. His concerto is what makes this CD worth buying. So too does the playing of Frédéric Pelassy, although the reserved playing from the orchestra prevents this version of the Symphony competing with the best versions on the market.