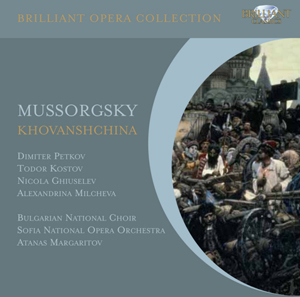 Buy from:
At first appearances, this Khovanshchina isn't too bad. There are a number impressive voices in the cast. Everyone involved sounds very Russian, although in fact they are all Bulgarian. And the recording sounds clean and true, even 'modern' despite dating from 1978.
But first appearances can be deceptive, and it soon becomes clear that this isn't an ideal Khovanshchina by any standards. It is a product of cold war politics in many respects. Western record companies, unable to work in Russia but still on the lookout for Russian sounding voices, saw countries like Bulgaria as the best compromise they were going to manage.
What they found there were very old-fashioned performing traditions, competent and dependable, but nowhere near as exciting as what was then happening in the Western opera houses. This is probably the last ever recording of Khovanshchina to use the Rimsky-Korsakov version rather than the more dynamic Shostakovich or Stravinsky versions. The conductor Atanas Margaritov seems comfortable with Rimsky's civilising influence, and gives a sweeping lush performance that is more in keeping with the editor's cosmopolitan view of the work than it is with the Mussorgsky's more brutal original conception.
This, of all operas, should make you sit up. So a performance like this that you can easily put on as background music is obviously doing it little justice. But that said, the quality of the singing is one of the reasons why it is so easy on the ear. The three bass leads, Dimiter Petkov, Todor Kostov and Nicola Ghiuselev, all have the power, clarity and low notes required for their respective parts. Ghiuslev is the most profundo of them, and his passages in the lower register are a real treat. Good too is Alexandrina Milcheva as Marfa. She has a rich, lustrous tone and puts in plenty of vibrato. Comparisons with Ferrier are fitting, and demonstrate both the quality of her voice, and the old-fashioned style of her performance. The orchestra is impressively precise, but there is rarely much excitement or drama from them. Again, both Rimsky and Margaritov should share some of the blame for that.
The distribution of the singers across the stereo array in this concert hall recording is impressive, perhaps a little more emphatic than in a modern recording, but not excessive. The balance between the singers and the orchestra is also finely judged. The cleanliness and roundness of the sound suggest that invasive noise reduction process were applied during the digital mastering. More annoyingly, there is a considerable amount of crackily interference in the right channel for much of the first CD. This was evidently already present on the recording's previous CD release, on Capriccio in 1996, so for once Brilliant Classics aren't to blame.