Liszt for Cello and Piano, Francesco Dillon and Emanuele Torquati 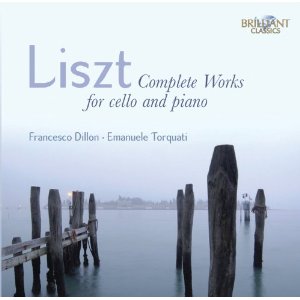 Liszt's original works for cello and piano are few, but all are well worth hearing. The five pieces date from 1874 to 1883, towards the end of the composer's life, when he had long given up his soloist career and had turned instead to more spiritual pursuits in his adopted home of Weimar.
As a result the music has a profound spiritual quality. Much of it sounds difficult, although it is rarely overtly virtuosic. Structurally and harmonically, each of these short pieces is very adventurous. There is little in the way of traditional form, and they rely instead on a kind of Tristanesque stream of continuous melody. And none of them ends conclusively, with Liszt opting instead to drift off into infinity by one means or another each time.
The longest and most significant of these works is the fourth, La lugubre gondola. This is one of those frustrating cases in musical history when the chronology doesn't quite fit the mythology. Both the title and the musical style suggest the piece was written as a memorial to Wagner, who died in Venice. But in fact the work was written shortly before Wagner's death, leading to some poetic suggestions from Liszt himself about the work being a premonition. That apart, the piece is classic Liszt. It is the longest piece on the disc, but despite its fairly slim musical materiel it doesn't outstay its welcome. And it is the ideal vehicle for Francesco Dillon's expressive but precise technique.
In fact, all the performances here are excellent. The two players coordinate the music skilfully, with ideal balance and ensemble. Francesco Dillon has a tone that veers between the woody and the lyrical as the music requires. He is generous with the dynamics, although not to a fault, and Emanuele Torquati balances him well in both the quiet and the loud passages. The recording quality is also good, giving a real sense of proximity to the players but also managing some space in the acoustical environment too.
The other works on the disc are all arrangements by other hands of piano pieces, but all remain thoroughly Lisztian. It turns out that two of the original works for cello and piano are arrangements by Liszt of his songs anyway. Stylistically, the common thread is Liszt's long, flowing melodies, all of which work beautifully on the cello.
We hear five of the Consolations, which do sound a little lighter of texture for having the melody removed from the piano part. It would be difficult to imagine Liszt himself endorsing piano parts with so few notes. But the cello remains the focus of attention, and the sheer beauty of the solo playing is more than enough to keep the listener engaged.
Angelus from the third book of Annees de Plerinages continues the meditative tone of the previous works. The long phrases and note values here make greater demands on Dillon's bowing technique, but it is never found wanting. Liebestraum No.3 seems like a bit of a populist lollipop to fill the programme up at the end. But it too is very much in the spirit and the mood of the previous works, so why not?