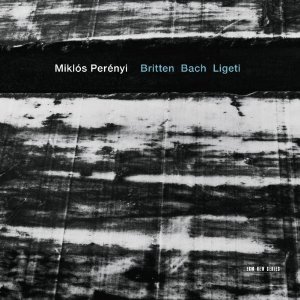 This new solo disc from Miklós Perényi comes hard on the heels of a very similar offering on the Wigmore Live label. In both cases, Perényi bases his programme on works by Britten and Bach, composers with whom he clearly has a deep affinity. They also invoke the spirits of two the previous generation's greatest cellists, Rostopovich in the Britten and Casals, Perényi's teacher, in the Bach. In fact Perényi shares many of their qualities. He has the spirited, energetic sound of Casals, but he also has the dark tone and disciplined approach of Rostropovich.
Britten's Third Suite often sounds as if the composer is thinking about the Bach Suites and trying, but failing, to avoid their rhetoric. Perényi makes all the stylistic connections clear, especially the passages where the music breaks into wide arpeggios across the strings, and we are constantly reminded where those sorts of textures originated. But Perényi treats the Suite as a masterwork, giving a committed and focussed account of every single phrase. This is particularly valuable when Britten writes simple but strident melodies, which have little to offer beyond the beauty of the player's tone. We get that in spades, allowing Perényi to maintain the musical interest even when the composer's inspiration flags.
Given that Perényi studied under Casals, the cellist who rediscovered the Bach Suites, comparisons between their performances seem inevitable. Like Casals, Perényi has a very tactile approach to the music, and the excellent recording quality allows us to hear up-close the minute variations in the sound of the bow against the string. On the other hand, he never indulges in the extremes of rubato for which Casals was known. Not that his playing is rigid either, but it is certainly more conventional as far as tempos go.
Like the Britten, this is a very serious and deeply-felt performance. That helps to make the listening experience all the more involving and also adds to the drama in the louder passages. But many of the movements here cry out for a lighter approach. Bach expects the bow to bounce between the strings, and the fast tempi to be articulated with shorter and more detached notes. But that's just not the way Perényi does things. His interpretation is wonderfully coherent and personal, but at times his sheer seriousness can drag it down.
Ligeti's early Sonata for solo cello might also benefit from a slightly lighter approach. But again, Perényi delivers an interpretation of such conviction that you can't help but appreciate it on its own terms. Stylistically, there is nothing to scare the horses here; it is very much Ligeti in Bartók mode, with some Hungarian folk music inflections and a few glissandos thrown in for good measure. It is a substantial piece though, and far more than just a novelty encore.
The recording quality is of the high standard you'd expect from ECM. The acoustic is resonant and warm, but all the details are there too. The packaging is elegant, of course, but the thick liner is mostly given over to a rambling and abstract essay from Paul Griffiths, who can usually be relied on to produce something more readable.
That apart, this is an excellent release, equal in quality to Perényi's Wigmore recital disc, but recorded in an environment that gives it a completely different atmosphere. Even in his advancing years he remains one of the greatest living cellists, so any more solo discs he might care to record would certainly be most welcome.