Superbrass: Under the Spell of Spain

Music for brass and percussion inspired by the vibrant country and people of Spain. 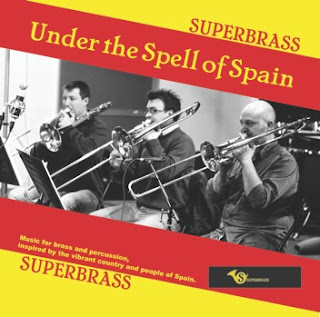 London's orchestral and session brass players well deserve their reputation as among the best in the world, but the chances they get to show off their skills are all too rare. Roger Argente, bass trombonist with the Royal Philharmonic, is putting this to rights with his new group – Superbrass. "Under the Spell of Spain" is their debut album, featuring an impressively diverse programme of new works and arrangements inspired by the country.
The project is similar in spirit to the London Trumpet Sound and London Trombone Sound albums of yesteryear. They too were designed to show off the skills of London's session brass players. The big difference though is the originality of the material here. There are no songs from the shows and no jazz standards. Instead, the programme moves between arrangements of renaissance Spanish music and jazzy numbers written for the occasion.
Renaissance ensembles and big bands are, of course, familiar territories for most brass players, and the stylistic sympathy that these players bring to every number is ideal. And don't worry if you think the early music might be a bit dry for your taste, the arrangers always add in thoroughly modern twists to keep both listeners and players on their toes.
The more modern music often looks to Latin America, expanding the Spanish theme to include salsa and tango. Given the quality of the results, it seems churlish to complain on a geographical technicality. And, as if to anticipate such concerns, at least one of the composers writing on a South American theme, Steve Waterman with "Fugatango", adds in some castanets for Spanish colour.
Fortunately though, none of the arrangers go overboard on the castanets, and on the few occasions they do appear, they are admirably restrained. That said, the brass players are accompanied by a considerable percussion section. Listening to the opening track "Como poden per sas Culpas" arranged by Jock McKenzie, which is a kind of Spanish "Fanfare for the Common Man", you could be forgiven for expecting a percussion-heavy programme, but the focus soon moves to the brass and stays there.
Although all the playing is to the highest standard, one or two performers really stand out. There's a kind of battle of the soprano trumpets between Brian Thompson in "Dindirindin" and Philip Cobb in "Air des Espagnoles". If the latter comes off best, that's probably just because he has more notes. Then there is some fabulously understated trombone playing from Andy Wood in Mark Bassey's "Donde el Mar Saluda el Cielo". A mention should also go to Kevin Morgan, the ensemble's only tubist, who for some reason is denied a solo, but who underpins all the textures admirably.
Given many orchestras' preference these days to record live, the studio album is becoming more of a rarity. But this disc is very much a celebration of what can be achieved under studio conditions. So we have ideal balance (for which the players themselves deserve a share of the credit) and an ideal stereo array. There is no sense of the atmosphere of a live event of course, and the reverb that many of the textures rely on is clearly digital.
There are a couple of curiosities in the liner. The fact that the disc was recorded in London is repeatedly stated, in at least three places under a union jack. Perhaps there is an identity problem going on here – a disc focussing on the skills of London musicians, but all based on the music of a different country. Programme notes are given for each of the works, but the numbering in the liner does not correspond with that on the back of the box, making cross-referencing a confusing business. The disparity stems from the second work, "Tientos y Danzas" by Gareth Wood, which has four movements. (Incidentally, this sounds a lot like a brass band test piece, and if it hasn't been used as such, someone is missing a trick.)
But bar some small grumbles about the track listings, this is an excellent disc. The Spanish theme is a great way to keep the diverse programme coherent, the arrangements all sound fresh, and the playing is beyond reproach. Roger Argente says in his introduction that the project has been influenced by the late, great Philip Jones Brass Ensemble. Well, Superbrass have shown themselves to be worthy successors to that group. Here's hoping their future recording output will be similarly extensive.