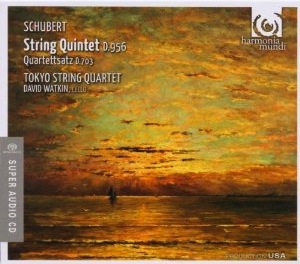 This disc finds the Tokyo Quartet at the very top of their game. As in their recent recording of the late Beethoven quartets, this is an interpretation that completely reinvents a favourite from the core repertoire. Schubert's C Major Quintet is given an opulent and expansive reading. It is the kind of slow and majestic performance that most ensembles would shy away from as the long arching phrases would highlight problems in their ensemble and tuning. But the Tokyo players are rightly confident in their own technical abilities, and this allows them to give the work an almost symphonic dimension.
Those slow tempos may prove controversial. They certainly create some structural issues that a brisker reading could gloss over. In particular, the fact that Schubert only ever gives the briefest of transitions between the sections means that there are often abrupt gear changes, between the slow introduction to the first movement and the exposition proper, from the famous main theme of the slow movement into its faster middle section, and the other way round in the scherzo. But the players treat those abrupt changes more as a virtue to exploit than a problem to resolve, and the sheer conviction and precision with which each is executed means that they always convince.
And the fabulous pay-off is the heightened atmosphere that the ensemble achieves in the slower passages. The opening gives a taste of what is to come. The depth of tone here is just wonderful, even in the quiet dynamic. Harmonia Mundi USA excel themselves in the quality of the SACD audio (the recording was made at George Martin's Air Studios), giving a wide and even response across the entire frequency range. And cellist David Watkin fits seamlessly into the Tokyo Quartet sound, bolstering those noble bass lines and giving the microphones something to focus on in the lowest register. The main theme of the adagio is given the slowest reading I've ever heard, but the continuity of the phrasing and evenness of the tone means that the music never flags. When this main theme is recapitulated at the end of the movement, the group gives a surprising emphasis to the added obbligato lines from the violin and cello, so much so that the main theme is hardly recognisable. Like the slow tempos, this is a brave and dangerous strategy, but again the conviction and precision of the performance means that the music's integrity is never at risk.
Given that the Tokyo Quartet's greatest strength is the atmosphere and intensity they bring to the slower passages, it is gratifying that the fast music is just as successful. Take, for example, the main theme of the first movement. The way that it launches out of the music of the slow introduction is ideal. Here too, the tempos are slightly slower than you might hear elsewhere, but there is plenty momentum behind the theme, which is never threatened by the unusually robust harmonies beneath.
The coupling is the unfinished Quartet in C minor, one of the many gems of Schubert's extensive catalogue that is not heard or recorded half as often as it should be. The completed first movement is surprisingly similar in its harmonies and melodic contours to that of the Unfinished Symphony, a comparison that is emphasised by the symphonic depth of the Tokyo Quartet sound. The composition trails off half way through the second movement, and rather like recordings of The Art of Fugue or Mahler's Piano Quartet, the ensemble chooses to play what the composer wrote and to simply tail off with the music as the staves become progressively whiter. It feels like a poignant and premature farewell, and the emotional power of this abortive conclusion, indeed the emotional power of both works on the disc, is heightened by the quartet's rigorous approach and resistance to sentimentality. These may be slow, expansive readings, but it is the discipline and accuracy behind them that gives them their extraordinary power.