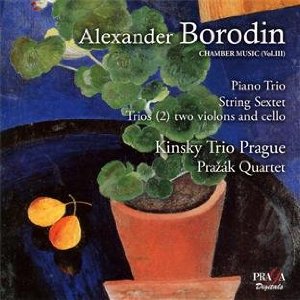 Buy from:
Prague has one of the most vibrant chamber music scenes in Europe, and Czech record labels do a great job of representing the city's many fine ensembles on disc. Sadly, the foreign distribution of these CDs is poor, and the number of them that make it onto the international market is no reflection of the sheer quantity and range that you can find there if you visit.
One or two companies are making efforts to put this to rights. Czech Music Direct (http://cmd.czecheverything.co.uk/) import discs into the UK from a variety of Czech labels, and there are many gems to be found in their catalogue. The distribution arm of Harmonia Mundi are also to be congratulated for bringing us this series from the Praga Digitals label. If this disc is anything to go by, the standards of performance and recording that the label offers are well up to highest you could find in any country.
Borodin's chamber music is presented here by two Czech ensembles, one young, the Kinsky Trio Prague founded in 1998, and one old, the Prazak Quartet, who have existed in one from or another since 1972. The standards of the two ensembles are equally high. Just as importantly, they both have a similar sound, so switching back and forth between them, as this programme does several times, never disrupts the flow of the music.
And the music does flow from one work to another with extraordinary ease. With the exception of the final Serenata alla Spagnola all the works here are early, dating from 1850, when Borodin was 17, to 1862, when he formally joined the 'Mighty Handful' of Russian nationalist composers. The nationalism of Borodin's later music is not so apparent here, and the only work with an explicitly Russian source is the G minor String Trio, which takes as its theme the folksong How did I grieve thee. Elsewhere the music is surprisingly German in character. Comparisons with Brahms' mature chamber works may be anachronistic, but they point to a shared source of influence in the music of Robert Schumann. And when the music does start to lean towards a more muscular, Russian sensibility, the style tends towards the cosmopolitanism of the (admittedly again later) chamber music of Sergei Taneyev.
These works are all competently composed, and in general the only clue that the composer is young is that he has not yet found the distinctive mature voice for which he is now famous. One consequence of this is that the melodies aren't quite as catchy as those in his later string quartets. That said, this is all melodically driven music, and that knack for melody that served Borodin so well in his later years is clearly developing apace through these pieces.
The Piano Trio in D major that opens the programme is an impressive and substantial work. It is incomplete, in that it is missing a finale, but the three existing movements add up to 22 minutes. The Kinsky players do a good job of keeping the textures light and rhythms bouncy in the first movement. They are a bit more ponderous in the Intermezzo third movement, as if they are trying to present it as a substitute for the missing finale. But that weight is good preparation for the String Sextet to follow. Again, any comparisons with Brahms must be considered coincidental, and rich as the textures are that Borodin draws from this bass-heavy grouping, they are still lighter than anything in the Brahms Sextets.
This too is an unfinished work, with only two tantalising movements. Then come the two String Trios, which sound remarkably similar in texture to the Sextet, as if Borodin is underplaying his hand with the larger ensemble but then making the very most of what the three players have to offer from the smaller grouping. The combination is curious, and rather than use viola for the middle part, Borodin opts for a second violin. But he achieves remarkable richness nonetheless.
The SACD sound is an added bonus, and not something we yet associate with Eastern European labels. The sound is precise and immediate, without ever being too analytical. The piano has a roundness to its tone in the first work, not ambient as such, but certainly warm. I understand that there has been some confusion about the SACD credentials of the previous volumes in this series, and while I can't comment on the surround mix, the SACD stereo layer certainly is what it says it is.
An interesting recording then, from two ensembles and a label that we could do with hearing much more from. Here's hoping that the distribution deal with Harmonia Mundi finds it the appreciative audience it deserves.