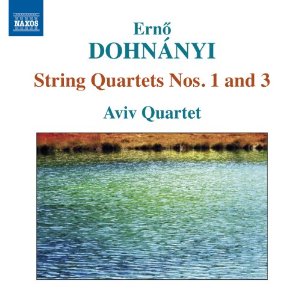 Ernő Dohnányi was a more prolific composer than the few of his piano works to have entered the repertoire would have you believe. His career spanned the turbulent times of the early 20th century, and although he remained a traditionalist, or at least a tonalist, he did seem to keep up with fashions and tastes as they rapidly changed.
The two quartets on this disc date from before and after the First World War, which may explain the aesthetic distance between them. Dohnányi rarely strays far from the Hungarian folk idioms that inspired him, but the way that this melodic material is elaborated in the two works couldn't be more different. The First Quartet is, for the most part, well mannered, homophonic music, with just enough textural variety to avoid monotony over its half hour span. The third, by contrast, is much more contrapuntal, and more harmonically adventurous too. Or perhaps the composer's age is the reason for the relative simplicity of the earlier work. The First Quartet was written when Dohnányi was in his early 20s, and from that point of view it is a work of tantalising promise rather than extensive or fulfilled ambition.
Nevertheless, it is the First Quartet that comes off best in this recording. The young Israeli Aviv Quartet, not to be confused with the more established Tel-Aviv Quartet, really excel in the clear, consonant textures of the earlier work. The recording balance also favours these more straightforward textures, especially the clear, penetrating bass of the cello, adding definition to the ensemble in every phrase.
The Third Quartet is more complex and requires more interpretation. The Aviv players make an uncertain start with some exaggerated portamento slides off anacruses in the opening bars (are they in the score?) but then settle into the main argument of the music. Some of the denser harmonies could do with more accuracy in the intonation, but the composer isn't doing the performers any favours in the way that these chords are voiced.
My initial concern on hearing this Third Quartet was that the music has more dramatic potential than this performance provides. However, listening to the main competitor on the market, from the Lyric Quartet (ASV CDDCA985), it is clear that their reading is similarly low on dramatic power. So I'm inclined to blame the composer for that one, for using a harmonic language and a range of musical structures that suggest dramatic intensity but for the most part fail to deliver it.
Or perhaps the problem is that comparisons, even subliminal ones, between these and Bartók’s string quartets are inevitable. Dohnányi may have acted as a link between Brahms and Bartók, but if so, his example only goes to show how many of Bartók’s innovations were his own work. But comparison with Brahms does show Dohnányi branching out into some 20th century ideas about harmony, structure, and the possible relationships between folk elements and classical forms. And Naxos are to be congratulated, as ever, for digging out some interesting and neglected repertoire. It may not have the historical significance to justify a commercial recording, but it is certainly worth hearing on its own terms, and the Aviv Quartet, while their performance is a little too understated and occasionally imprecise to be definitive, are certainly competent enough to fulfil the demands made on them by the composer and the label alike.