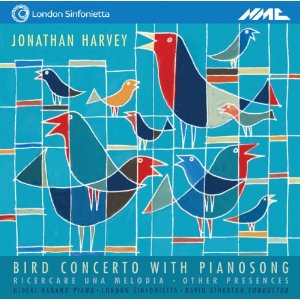 It seems disingenuous to call Jonathan Harvey one of Britain’s greatest composers, given his apparently greater affinity with recent developments in French music. Messiaen and his Spectralist successors between them make up the cultural context for this disc. Yet the way those influences are combined is distinctively Harvey.
Bird Concerto with Pianosong, while it isn't described as such, is clearly a homage to Messiaen. The work uses recorded birdsong, which is combined with the piano and orchestra. As in Speakings, Mortuos Plango, and many other of Harvey's works, the idea here is to gradually bridge the timbral and conceptual space between the two kinds of sound. Like Messiaen, Harvey must slow down and lower the pitch of much of the birdsong to bring it into the range of the instruments. The percussion section acts as a bridge between the two sound worlds, and friction drums are used effectively to ground the otherwise flighty textures. The solo piano part often resembles Messiaen's birdsong works, but the textures are lighter. In fact the textures throughout the piece, in the electronics, the orchestra and the piano are considerably more approachable than in Messiaen. Harvey occasionally opts for percussive or jagged textures, but they usually relent sooner rather than later. Otherwise, the meditative moods that the work often lapses into owe much to the Spectralists, particularly Grisey, and also presumably to the composer's Buddhist faith as well.
The other two works on the disc (Ricercare is presented twice in versions for oboe and cello), both work on the more straightforward premise of a solo instrument with live electronic manipulation. One remarkable feature of Harvey's use of electronics is his ability never to be defined by the state of the technology. Ricercare dates from 1984, while Other Presences was written in 2006. But both sound fresh and new. There is no sense here of experimentation, rather Harvey shows complete mastery of his means. Both works involve real time manipulation of the solo instrument's sounds. The idea is to invoke other, virtual instruments with related but clearly different sounds. So the range of the instrument is extended through the electronics, most effectively in the oboe version of Ricercare, where a deep bass oboe or bassoon sound comes through as an accompanying voice. Harvey's Buddhist faith is again invoked in Other Presences, when the trumpet sound is manipulated and lowered to resemble the dungchen, the long straight trumpet of Tibetan ritual.
The performances, sound manipulation and recording are all to the highest standard. One disadvantage of an audio recording is that you can't see where or what each sound is coming out of. In fairness, that is often the case with live performances of Harvey's music as well, and as the composer is clearly intent on blurring the boundaries, perhaps it isn't relevant.
Pianist Hideki Nagano is the ideal soloist for the concerto. His touch is precise, yet he always gives the impression that he is exploring the textures and contrasts as much as the composer. The players in the solo works are equally competent, but should share equal honours with the Sound Intermedia team, who do an excellent job of realising Harvey's terrifyingly ambitious electo-acoustic ambitions.