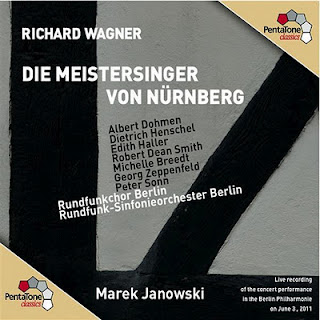 This is probably the most symphonic Meistersinger you'll ever hear. Conductor Marek Janowski's stated aim with this cycle of concert recordings is to liberate Wagner's operas from the excesses and distractions imposed by stage directors. The result is Wagner as pure music, with the story played out through harmonic progressions and leitmotifs rather than with staging and acting. The score certainly provides all the musical logic that such an approach requires, I'm just not sure it give us the whole picture. Wagner struggled to reduce the primacy of the music in his Gesamtkunstwerk concept, and the fact that this project succeeds as it does only goes to show how Wagner himself failed to integrate and balance all the elements of his new genre.
Musically speaking, the singing here is excellent, and you'd be hard pressed to find a cast of such high and even quality on any other recent recordings. Albert Dohmen has a light tone for Sachs, but has all the authority the role requires. Georg Zeppenfeld and Dietrich Henschel are both surprisingly bassy as Pogner and Beckmesser. Robert Dean Smith has an impressively even tone across the wide range that the part of Walter requires. He sometimes sounds a little distant, but that might just be a result of his slightly nasal tone. Peter Sonn brings a rich but focussed tone to the part of David. And Edith Haller has confidence and presence as Eva, although her vibrato, even on the shortest notes, may not be to everybody's taste.
But the qualities these singers bring to their various roles are strictly musical. Given Janowski's allergy to stage directors, he presumably vetoed any 'semi-staged' element to these performances. As a result, there is very little sense of characterisation in any of the sung roles. Dialogues are musically precise, but the interacting is always with the listener rather than between the characters. The stereo mix distances the singers from each other, which only increases the sense of alienation between them. Little effort is made to make Pogner sound old, or to make David sound young. And the huge symphony chorus, impressive as it is in the riot scene, sounds far too big ever to fit on a stage.
But so much for what this recording isn't. As I say, Janowski has other aims, and when judged by those standards everything here is a triumphant success. His interpretation manages that tricky balance between freedom of expression and adherence to Germanic musical values. There is also plenty of humour, something that many conductors bypass in an effort to make the work sound more Teutonic. The absence of staging, or even semi-staging, allows the conductor to take every tempo more or less as he likes. So, for example, the transition into the 2nd scene of Act 3 is an orchestral show-piece, and the riot at the end of Act 2, is paced to show off the chorus at their best, without having to worry about their acting responsibilities. In fact, the whole of the second act is a real treat, with the orchestra continuously swooning through all the various love songs. Janowski's symphonic vision for the piece pays off in the dramatic climaxes in the outer movements. He really lets the brass go to town, and raises the dynamics of the rest of the orchestra to match them. That makes for some impressively conclusive conclusions, and some startling punch chords when they appear out of the blue. And in case that makes him seem heavy-handed, there is plenty of delicacy here too. Listening to the Overture, it is clear that he is keeping a great deal in reserve for later on, making this opening more of a tantalising taster than than the robust concert opener we are more used to.
The sound quality is up to PentaTone's usual high standards, giving exceptional clarity to soloists, orchestra and chorus alike. But again, it is worth bearing in mind that this has the effect of emphasising the concert hall setting. The acoustic at the Philharmonie is expansive and generous, making the recorded sound warm and inviting, but also distancing it further from the ambiance of an opera house.
Just one technical problem to report: I've had a lot of trouble getting my player, a Marantz SA8003 to recognise the stereo SACD layer on all four discs. I've never had any such problems with any other SACDs, not even the Flying Dutchman in the same series. Asking around on message boards, nobody else seems to have found this, and when I contacted PentaTone they were at a loss to explain it as well. As a result, I have had more occasion than usual to compare the CD and stereo SACD versions. For the most part, the CD layer is very good, and almost as good as the SACD layer, when I've been able to access it. The difference comes in the complex contrapuntal textures, especially from the choir. The riot scene in Act 2 is impressive on CD, but on SACD all the individual lines are apparent, adding a whole new dimension to the music. If anybody else has been having these problems, I'd be interested to hear. In the mean time I'll continue struggling to get the SACD to play, as it is certainly worth the effort.