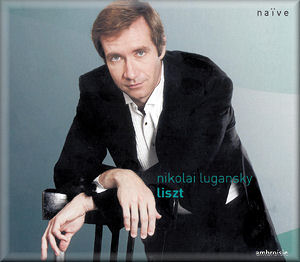 2011 was Liszt year for the classical CD industry, and the number of all-Liszt recital discs that were released to commemorate the composer's bicentenary was too large for the mind to comfortably contemplate. Nikolai Lugansky took a risk by putting out his disc of well-known Liszt favourites towards the end of the year, when appetites for this repertoire must surely have been close to sated. Fortunately, his contribution was a distinctive one, and however many times these pieces have been recorded (even within the same year), hearing them from him is a rewarding experience.
The most impressive aspect of Lugansky's Liszt is the range and beauty of the tone colours he is able to apply to the music. The beauty, and to a certain extent the clarity too, owe much to the recording team and to the choice of venue – Potton Hall in Suffolk. The piano is presented in a warm but intimate acoustical environment, which is ideal for Lugansky's pianism. His touch is always precise and defined. Nothing ever feels rushed, but then he never lingers either, ensuring that the (sometimes convoluted) logic of the phrasing is never compromised. From this point of view the timbres seem almost incidental, as they should, but if you listen closely to Lugansky's various articulations, the sheer range of colours and textures is astonishing. Most are warm and broad, but the tone colour never stays the same for long and is always in the process of transformation. This really aids the many long crescendos, with a gradual hardening of the sound accompanying the increasing in volume. It also allows greater independence for the two hands. Liszt regularly indulges in the kind of expansive textures that you could mistake for piano duet, and by giving different colours and articulations to the two hands, Lugansky is able to skilfully maintain the deceit.
He never goes in for extremes, either of tempo or dynamic. This increases the sense of poise in his playing, as if he is always keeping something in reserve, just to show that he is not getting carried away. That feeling of control is valuable, and all too rare in Liszt, but it does risk the feeling of emotional detachment. Some of the quieter and slower movements, such as Chaise-neige with which the programme opens, can feel a little stilted. The louder music fares better, and by avoiding dynamic excesses, Lugansky is able to maintain the clarity of his textures, even in the loudest passages.
The programme mixes selections from the Annees de pelerinage and the Transcendental Studies. As I say, the choices are all very familiar, especially after a whole year of Liszt recital discs. La Campanelli is a highlight, especially in the way that Lugansky holds back before each presentation of the main theme. That sense of poise that characterises his playing serves this music very well, and he keeps the listener guessing about the when the downbeat will come, yet without it ever seeming like an indulgence.
But the biggest treat on the programme is Liszt's transcription of the liebestode from Tristan und Isolde. The liner notes make the point that this is, in fact, much more than a transcription, and that Liszt uses all sorts of pianistic effects, from subtle tremolos to unusual pedalling, to bring the music to life. And this is exactly where Lugansky's skill with tone colour comes into its own. Liszt obviously had a deep understanding of Wagner's orchestration, and Lugansky does too. Between them they recreate this operatic conclusion with all the atmosphere, tonal variety and, yes, passion you could want. Including the piece was an excellent decision, and Lugansky could easily capitalise on its success with more recordings of Liszt's transcriptions. How about the Beethoven Symphonies? That would make for an interesting recording project.