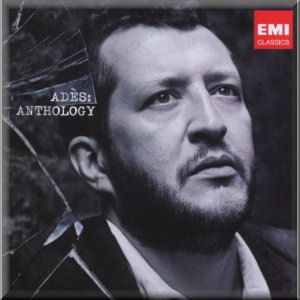 
Thomas Adès may seem too young to warrant an anthology, but in fact he is already 40, and with 20 years of solid compositional achievement behind him, the discs were easy to fill. The release serves two functions, or rather two audiences. Anybody not yet familiar with Adès' music will get all the introduction they need here. But there is also a surprise for those who know his work: the first two pieces, both for piano, are new, and are given here in a debut recording played by the composer himself.
Powder her Face – Concert Paraphrase may not technically be completely new, but this is far more than a simple arrangement of the best bits of the composer's first opera. The paraphrases by Liszt are clearly a model for the piano work Adès has created. Stravinsky's Petrushka arrangement also springs to mind. Like Liszt and Stravinsky, Adès distils the musical essence of his earlier work, and then presents it in a completely different form, as a virtuoso recital piece. Various stylistic allusions are drawn from the work, which expand the music's vocabulary and give it a sense of cultural context. The piano textures are classic Adès, Modernist and often acerbic, but fizzing with energy and constantly changing rhythm.
The Mazurkas are similar, but here Chopin rather than Liszt is the apparent model. Like Chopin, Adès distances himself from the rhythmic expectations of the chosen form, while always presenting music that clearly has a basis in dance. If anything, the Mazurkas are even more virtuosic than the paraphrase. They were originally written for Emanuel Ax, and provide an excellent vehicle for both Ax and the composer himself to display their virtuosity.
While this double album is clearly a bargain to be welcomed by Adès fans new and old, it seems a shame that these new recordings had to make their first appearance in such a format. Adès has clearly been a canny signing for EMI, and if the company itself were in better financial condition, these new works would surely have appeared at the head of a full recital CD, Adès as pianist continuing either with some of his earlier works or perhaps some of the Janacek or Nancarrow of which he is so fond.
But as it is, the programme following Mazurkas takes us straight back to Arcadiana, a piece both written and recorded in the 1990s. The footnote beneath the first two piano works "first recording" is disingenuous, as it surely means first release. Great as Adès is, I suspect all, or almost all, of the works here have only been recorded once.
How fortunate then that the recordings are all to such a high standard. Arcadiana, performed by the Endellion Quartet, and Living Toys, from the London Sinfonietta under Markus Stenz, are the only recordings here on which the composer does not appear, either as pianist or conductor. But both are played with such energy and stylistic sympathy that you can certainly feel his spirit pervading the studio.
I won't go into any detail about the previously released tracks, except to say that Adès' genius shines through in every piece. My two favourite Adès works are both here, the Piano Quartet, which he plays with the Ardittis, and the Violin Concerto, played by its dedicatee Anthony Marwood. In both cases, Adès writes complex and gritty music, yet with such dexterity and impulsive musicality that the results are surprisingly easy to listen to.
Any anthology like this is going to have to disappoint with some omissions. Tevot, In Seven Days and any of the instrumental arrangements from The Tempest would have made welcome additions. Also, when EMI released the Mahler 5 from Rattle's first concert as principal conductor the Berlin Philharmonic, they omitted the performance of Adès' Asyla that preceded it. This might have been a good chance to make amends, but no.
The liner consists of an informative, but frustratingly brief, essay from Tom Service, followed by an interview with the composer by Ian Bostridge – a very abstract and philosophical affair. No texts are given for America: a Prophecy, nor can I find them on the internet.
Otherwise this an excellent compilation. Whatever their current difficulties, EMI have done well by their star composer, pianist and conductor, and this set gives ample scope to appreciate all those skills. Here's hoping that the next 20 years of Adès' career live up to the expectations set by the extraordinarily accomplished music here.